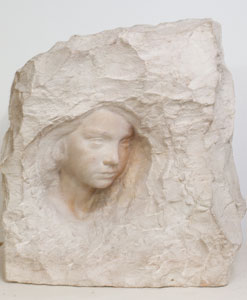 A rare collection of sculptures and reliefs by the French-Jewish artist, Naum Aronson (1872-1942), who was active in Paris in the early 20th century
The acquisition of these sculptures made by Naum Aronson—one of the greatest Jewish sculptors—to the Petach Tikva Museum of Art is a fascinating episode. The initiative was set in motion by David Tabachnik, Deputy Mayor of Petach Tikva late in 1952. During a trip to France on behalf of the Zionist Organization that year, Tabachnik arrived at a children’s home in the Andeleis village, 80 km. from Paris, where Jewish children, Holocaust orphans, were placed. Upon his arrival he noticed children throwing stones at some sculptures scattered around. He was deeply impressed by the sculptures, which turned out to be the work of one of the greatest Jewish sculptors, Naum Aronson, born in Russia, who had lived and worked in France for many years. These were stone sculptures and bronze casts of Beethoven, Chopin, Tolstoy, Lenin, Louis Pasteur, and other luminaries. Upon the outbreak of war Aronson fled to the Unites States of America, and put his work for safekeeping in the Louvre Museum basement.
After the Nazi occupation of Paris, the Nazis decided to confiscate a large portion of the treasures at the Louvre and transfer them to Germany. The sculptures were loaded on a train headed to Berlin, but the French engineers managed to prevent the transition of the artifacts by routing the train throughout France for 40 days. When the train finally stopped in one of the French villages, the artworks, including Aronson’s sculptures, were unloaded, clandestinely handed over to the French Resistance, and subsequently transferred to the children’s home in Andleis.
Naum Aronson was born in 1872 in the village of Kreslavka, Vitebsk (formerly Russia, currently Latvia). He began sculpting at a young age. At sixteen he went to Vilna to study at Ivan Trutneu’s Drawing School for ten months, encountered anti-Semitism and returned to his hometown. In 1891 he went to Paris, a loadstone to East European Jewish artists at the time, where he met Auguste Rodin (1840-1917) and became acquainted with and deeply inspired by the work of the Impressionists. Due to financial difficulties, he was unable to attend the Ecole des Beaux Arts, and learned the secrets of sculpture on his own.