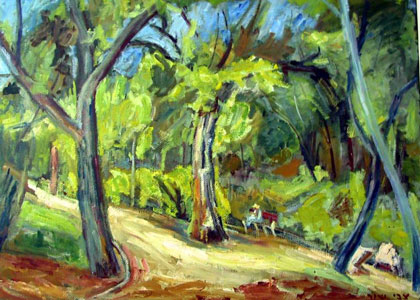 Some 60 works by painter Zvi Shorr (1898-1979) documenting the development of Petach Tikva’s local identity and life, landscapes and people
Zvi Shorr, the renowned Petach Tikva painter, was among the initiators of the Petach Tikva Museum of Art. Shorr conceived of the idea of founding a museum of art next to the institution dedicated to perpetuation of the city’s fallen soldiers, Yad Labanim. He worked toward its realization in collaboration with Baruch Oren, the Museum’s first director.
In addition, together with artist Alexander Bogen, Shorr founded the first painting, sculpture, and ceramics classes at the Museum whose teaching staff included Avigdor Stematsky who used to walk from Ramat Gan to Petach Tikva. Shorr headed the painting studio. He was the living spirit behind the exhibitions in the nascent museum, and his many contacts helped in acquiring artworks for the Museum’s collection. Shorr and his family contributed the first paintings to the collection and encouraged bereaved families to donate artworks in memory of their loved ones. Shorr was also the first artist to exhibit in the Museum, in 1954. Following the donation of his painting Hovevey Zion Street (Petach Tikva’s first street) to the collection, the Museum purchased one painting every year from him.
Petach Tikva, the “mother of settlements,” with its landscapes and sights, was at the focal point of his oeuvre in those years. Thanks to him we may observe the city with its green expanses and human scale, before the towering multi-story buildings were erected; we can observe Hovevey Zion Street, The Old Winery, the artist’s neighborhood Neve Oz, and views of the “Yad Labanim” building and the surrounding park.
Shorr used to carry two canvasses with him, an easel, and a portable box of paints he made for himself, and paint the landscapes of the Sharon, Petach Tikva, and Tel Aviv. He loved the play of colors and dancing light on the Eucalyptus leaves. To many of his paintings he gave titles such as On the Outskirts of Petach Tikva, On the Outskirts of Tel Aviv, etc. His student, Ilan Nachshon, an artist and journalist, wrote about Shorr: “Anyone who knew him will remember him walking in the streets and alleys, a broad-brimmed hat on his head, and an easel, a folding chair, and a box of paints in his hands. He would find his subjects in hidden corners in Petach Tikva, Tel Aviv, and the Sharon area, where he portrayed old houses, surrounded by thick-trunked trees and intimate vistas.”
The Petach Tikva Museum of Art Collection now includes some 60 works by Zvi Shorr, the most significant representation of this Eretz-Israeli artist who was influenced by the School of Paris.