An Archive of the Moment: Tali Navon Following Drawings by Ze’ev Tishbi 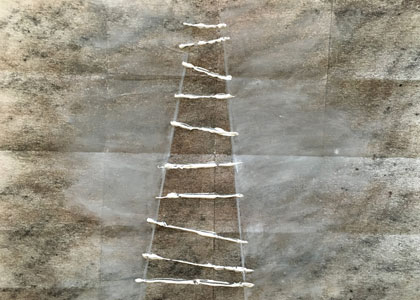 Tali Navon’s exhibition was inspired by Ze’ev Tishbi’s (1915–1953) sketchbooks, held in the Petach Tikva Museum of Art collection. It focuses on drawing as an act which signifies existence, linking past and present. Navon uncovers Tishbi’s drawings, most of which depict intimate portraits and the daily life of the soldiers with whom he served during World War II. Her own drawings, on the other hand, explore the intimacy resulting from the encounter between the attempt to capture a segment of reality and the search for the pure essence of the line, the rhythm of the drawing hand, and the interaction with the drawing surface.
Ze’ev Tishbi passed away prematurely, when he was only 38, the day before the opening of his exhibition at the Yad Labanim Museum, Petach Tikva, in 1953. Navon focused mainly on drawings he created during his service in the Jewish Brigade in the British Army. She conducted a thorough research about him, using archival materials she found at the National Library of Israel and elsewhere.
Opening Tishbi’s sketchbooks, Navon must face the exposure that she herself forced on them. Henceforth, she creates stratified intimate drawings, some of them on large sheets of brown paper, some on transparencies, parchment, and panes of glass, surfaces which allow for an interplay between opacity and transparency. In her drawings she outlines a labyrinth of imaginary, distorted, and subversive perspectives in which the viewers traverse spatially, as well as in terms of time, memory, and history. The folded sheets and the small drawings are all encased in wooden boxes which are installed on display tables, as customary in archival reading rooms. Similarly, the drawings are not readily visible; they require scrutiny and leafing to be exposed by the viewers who are invited to deviate from their passive observation stance and engage in an independent act of discovery.
The drawings undergo yet another metamorphosis when Navon creates an animated video piece based on them, which introduces a meta-artistic view of drawing in general, and the exhibition in particular. In the large-scale triptych, Hoarding Bulbs, drawing is already a presence in the space, and viewers are invited to experience its materiality as if they had stepped in-between the lines. In all the exhibited works, drawing takes shape as an act which touches upon the gap between events in reality and the subject’s fragile inner world.
With the support of Israel Makov

With the support of Israel Makov