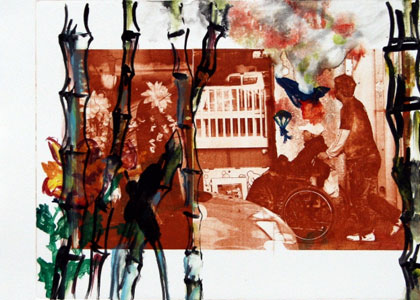 The meandering wall in Gil & Moti’s installation – comprising etchings, an audio tour and a video – offers an artistic analysis of social and political predicaments in Israel.
The work turns the ears and eyes of those participating in the tour to places and people located on the margins of the Israeli landscape, though not necessarily in the periphery but , rather, in Jerusalem, Jaffa,Tel Aviv and Petach Tikva.
The seemingly touristic journey, created by this duo of conceptual artists, parallels a mediated tour at an art exhibition, a tour in which the guide describes what is seen in the works themselves – something the viewers can do on their own. It is an action that voids the guide’s role of its essence, since it lacks any interpretative dimension or technical and historical explanations about the works. The absence of an interpretive act leaves the reality as it is seen through a “tourist” bus window, at a cursory glance – flat, simple, apolitical.
Deeper attention to the audio guide’s descriptive sentences, however, reveals a reality of occupation and appropriation, a foregrounding of the Zionist idea, the settlement of the land and the Hebrew language in an Arabic speaking space. The descriptions reveal a daily reality of soldiers being part of the Israeli street experience, of migrant workers caring for elderly people, of Palestinian children playing, of placards selling properties and so on.
Gil & Moti create a tour that relies on seemingly simple, quotidian, replicable images. They emphasize the gap between hearing, seeing and the viewer’s imagination. The responsibility of seeing reality’s complexity is entrusted with the viewers, who are asked in their turn to imagine, connect, deduce and understand. The guide, as well as the installation itself, offers a way to peek into and observe a much more complex reality than the one perceived by the quick gaze of a temporary guest.