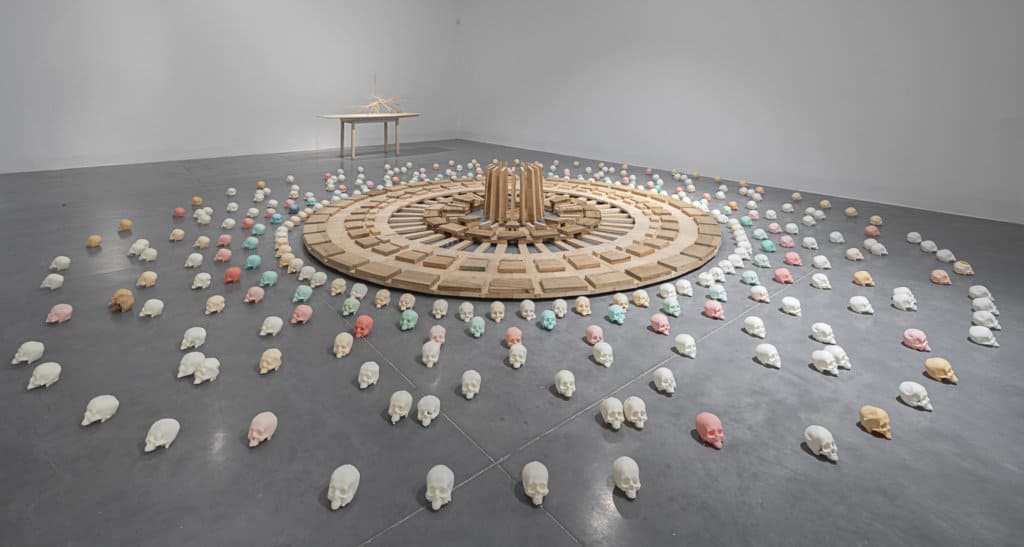 Gabi Kricheli׳s exhibition is a garden of paths at once meditative and jolting, which marks the trajectory of human culture and knowledge in time via a series of hints or traces. Conceptually and structurally, the garden is comprised of seven elements. Each is an avenue of action taken by the artist in the public space; a door to a project that took place (and will possibly carry on, or one that never occurred) outside the museum space; a window to an artistic, scientific, historical, and political narrative. Separately, each of the elements represents a site of sanctity and secularization, preservation and violation; together they signify another space—heterotopic, marginal, and subversive. In the exhibition, they create a sculptural setting which blurs and shuffles the boundaries between real and fictive, allowed and forbidden, scientific and imaginary, to examine manifestations of knowledge and control, culture and power.

In the beginning was the Point—a point in time, in 2016, when Kricheli witnessed a truck hitting a tree near his studio. The part of the tree that was damaged grew and recovered with impressive speed, and Kricheli decided to carve it to beautify the wound, thus affecting the tree׳s growth. Subsequently he began carving other tree trunks, marked for relocation throughout the city—an act documented in the video on view in the exhibition, which presents it as an ongoing process taking place.

A different type of carving is presented in the work A Kid in His Mother׳s Milk, whose title alludes to the biblical prohibition of eating meat with milk. In Kricheli׳s work, this prohibition was translated into a sculpture carved from branches of cannabis plants he grew—an abstract sculpture that represents relations of dependence and inspiration, exploitation and creation, man and nature.

Accelerator—a wooden sculpture, four meters in diameter—was sculpted by Kricheli after the front of the particle accelerator (the Large Hadron Collider) at CERN (the European Organization for Nuclear Research) in Switzerland. The particle accelerator is a massive apparatus that recreates the Big Bang on a small scale. It was built through an international collaboration to allow observation of the behavior of elementary particles, which at the time of its establishment in 2008 were still a scientific theory yet to be proven. The accelerator׳s façade reveals the mathematical grid underlying the design of the scientific device, which concurrently resembles a church rosette. Under Kricheli׳s hands, the rosette underwent another visual incarnation: it lies on the floor like a large mandala, surrounded by a layout of replicated skulls, which Kricheli titled Golgotha—an allusion to Calvary, the hill considered as Adam׳s burial place and the place where Jesus was crucified in Christianity (also referencing the Hebrew word for skull, gulgolet). Kricheli created the skulls using a model prepared from an average of data from approximately 5,000 scanned skulls of people, who uploaded them to the Internet anonymously, each for his/her own reasons. The ״master״ skull was printed on a 3D printer in a quarter of its original size, from which Kricheli cast about 400 skulls by hand, each slightly different from the original as a result of accidental distortions and the wear of the mold. Together they signify an ancient primitive sculpture with cosmic associations, possibly in the process of construction, or the remains of such a sculpture long destroyed.

Inside a sculptural gazebo he built in the garden of paths, Kricheli presents three markers of rule and power that outline human history: small tile fragments from the Roman excavation site in Beit She׳an, which he imprinted with sculptural signs, forming a secret alliance with the Roman floorer who took part in that vast architectural–engineering enterprise two thousand years ago; the Reichsadler (Imperial Eagle) symbol—a readymade that a seller at a World–War–II paraphernalia market in Berlin wrapped in a napkin and shoved into Kricheli’s pocket; reluctant to touch it, he wrapped if in a napkin, until a few years later he could re–examine the artifact as well as the great darkness, violence, and evil imprisoned in it; and New Money—ten coins of one shekel, which the artist cast in gold and gave them an ironic title that captures the symbolic, and at the same time highly realistic, relationship between the individual and the capital systems.

As a multidisciplinary artist, Kricheli peruses the boundaries between media, and every action he takes, inside or outside the studio, is adapted to the object or image he seeks to create—whether intuitive or carefully planned, random or theatrically orchestrated. He defines a space of renewed and critical experience of history and art for himself, challenging the systems of practices and norms guiding the labor of life, and creating an apparatus of suspicion towards objects, actions, and concepts: What is reality and what is the myth associated with it? What is life itself and what is the imagination that animates or deconstructs it? Suspicion prevents viewers from enjoying the works and objects without heeding the mechanisms structuring them: the masterful carving, the mathematical calculation, the engineered structure, the sculptural decoration; it deconstructs and dissolves the aura of all things, if only so that they may enchant us again.