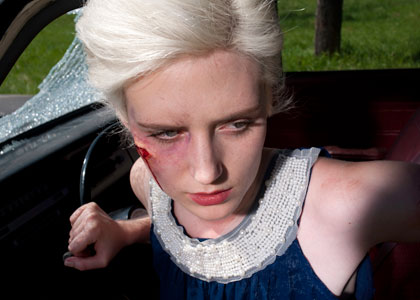 Tami Amit’s solo exhibition features a series of staged photographs centered on portraits of women, while exploring and constructing her own identity through the female image. Calling to mind Hollywood-cinematic and fashion productions, the photographs combine meticulous aesthetics with nightmarish, elusive scenes eliciting a sense of horror and mystery. Amit has been photographing women for over a decade. One woman, alone, each time. This persistent act and the accumulation of images over the years attest that she is seeking something in the women’s appearance—something which eludes her, and therefore eludes us, the viewers, as well. Amit’s photographs are like a quest for identity, for the image. Comprising both continuity and repetition, her journey is an endeavor concerned with reconstruction—of a moment, an apparition—in which a link is created between image and self. In the series of works presented in the exhibition Amit repeatedly reconstructs her moment of self-constitution through the image of another woman, juxtaposing these manifestations to create a community of solitary women, a cluster of solitudes—a group of woman images which she dubs “Sisters.”