Tal Shoshan: Take Me Out of Here 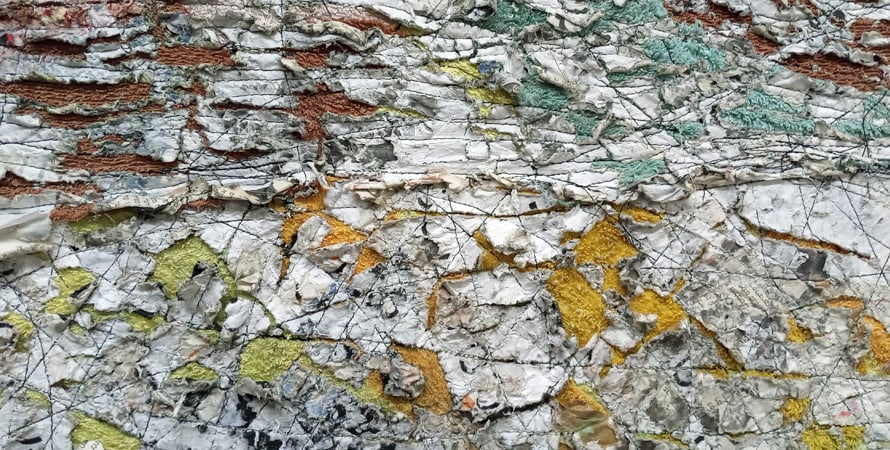 We step into a landscape which is an interior, a hidden space whose walls have been breached, revealing it in all its familiarity and strangeness. The space is inviting, drawing us in with its tactile sensuality, its formal richness, and the interrelations between the various objects within it. As we go in and get closer to the works, however, we are engulfed by a sense of a disaster that has occurred, time that has stood still, and signs of nature and culture that seem to have frozen in one jolting moment. Tal Shoshan explores the traumatic memory embedded in the material and the image that emerges from within it. Using a sculptural language based on textiles and the arts associated with them, manual and industrial alike, she maps the space and time, and the journeys of the inanimate and living bodies within them.

Shoshan brings the current journey to the place where everything begins, to her studio, which she stages as the workshop of a doppelgänger seamstress. Shoshan’s studio is an underground bomb shelter with one small window, which must be vacated in times of war. The thick concrete walls make it too cold in the winter and too hot in the summer. The lighting is fluorescent and industrial, and the constant threat of municipal evacuation always hangs in the air. From this space, her works are created as essentially dystopian worlds. The plea “take me out of here”—which echoes in her mind following visits to hospitals with a close family member—expresses the desire to escape the consuming spaces in which we are trapped.

The “seamstress” is engrossed with the idea that through the work of art she will be able to face the temporality and transience of things and people; that through the act of sewing, which simultaneously destroys and recreates, she will learn not to fear the mutability of things, their wear and tear, dismantling, and disintegration. The “sewing” artist approaches the raw materials and begins to work. She follows unraveled threads, choosing to work on various textiles, such as garments taken from the personal and family closet, or sheets, towels, blankets, pillows, and rugs from her or her close circle’s immediate surroundings: textiles used for wiping and covering, ones which were stained with sweat and body fluids, ones which she had already washed, folded, repaired, used. The first object she took into her hands was a shirt her son wore from the age of one to the age of four. Through that shirt she confronts the potential of loss inherent in her very being—the changing body, aging, and sickness. She sought to preserve the shirt as a symbolic element, while operating on it in a way that would help her come to terms with the finality of things. The actions she performed on the shirt amounted to destruction and weathering of the surface.

The “seamstress” covers the textiles with layers of newsprint, and then with soft white tissue paper used to wrap precious objects, covering them with random, Sisyphean sewing. In the next phase the textiles are soaked in water, dried, and then cut or scraped and rubbed, until the layers of paper tear off and crumble, while the seams continue to hold what is left—the torn newsprint and paper—together. The resulting surface is white for the most part, as after a cataclysm. The sewing holds the thing together, fastens it, protects it from the changes taking place in the body, the growth, the superfluity, the possible disappearance of the garment owner, the unknown future, and the danger of disintegration of the domestic space. Nevertheless, despite the preserving act, the textile object shows signs of physical illness and aging, as it not only crumbles but also whitens.

Shoshan’s journey in the studio-home is a private experience and at the same time a collective one, embodied in a symbolic-national textile—a flag that has been stripped of its symbolism. The flag stands tilted and isolated like an abandoned symbol, facing the other textiles spread out on the wall, stretched like maps that mark a place no longer in existence, or one that is planned for the future. The space as a whole thus sustains the relationship between nature and culture, since the clothes and objects—which originate in the factory and continue in the encounter with the human figure—return to their raw origin in textures of mildew, decay, and erosion, reminiscent of the growth of an organism.

In the sewing artist’s workshop, the rectifying female work and the material investigation sprout a wand that effectuates both destruction and creation, commanding us to confront our deepest fears and pains, while reveling in the industrious work, the mesmerizing materiality, and the relentless composition.