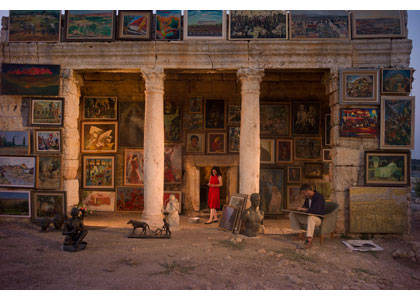 Museum collections of various kinds are the object of artist Dana Levy’s ongoing, consistent study in the past decade. Levy traces their diffuse logic, always opting for the whole over the details, while exploring the passions setting the collectors in motion and the accumulated picture sketched by the collection at large.

The point of departure for the video piece Impermanent Display was a pair of pendant paintings by Giovanni Paolo Panini dating from 1757 entitled Ancient Rome and Modern Rome, showing views of the city, old and new. Hanging side by side at the Metropolitan Museum of Art, New York, they portray a vast Roman estate with paintings lining the walls from floor to ceiling and wall-to-wall, glorifying Panini’s patron—Count de Stainville—for his great riches, and Rome for its magnificent cityscapes. At first glance, the homogeneity of the estate interiors lends them the appearance of replicas. Only a closer look reveals their divergence. The paintings thus introduce the rationale behind the collection as a reflection of economic power and political force; as a focusing lens which brings numerous sights together, which later evolved into a model guiding many art institutions worldwide to this day.

The Petach Tikva Museum of Art Collection is similar in nature to those of other peripheral museums in Israel: collections which hold works by renowned artists alongside works by amateurs, and are essentially comprised of an assortment of sculptures, landscape views and abstract paintings, portraiture and documentation of local daily life. Levy’s new work pays tribute to Panini’s paintings, and at the same time—to the collection of Petach Tikva Museum of Art, a tribute which crosses early and late, and in some respects—realizes the “dream” of the local museum’s collection, which clings (if only for one night) to higher authorities.

With the blessing of the Museum and the Israel Antiquities Authority, Levy was given permission to take some one hundred works from the collection storeroom, which were suspended on the walls of the Mazor Mausoleum archaeological site—a Roman tomb near Petach Tikva. The modernist paintings were hung on the walls of the only fully preserved Roman structure in Israel, inspired by Panini’s paintings, and in an attempt to imitate the hanging mode—but the representations and scenes conveyed by the works are utterly different. The paintings hung in Mazor feature the aforesaid mix of themes typical of collections of peripheral museums in Israel: figures of people absorbed in study, Arab women, a uniformed soldier, and an ultra-orthodox watchman, alongside the Knesset building, the Western Wall, and landscapes of Petach Tikva. A subjective, stratified picture of life in Israel as experienced and represented in the pre-State days of the Yishuv and the early years of the state accumulates here, a process which provides a view of this formative period from private-personal perspectives. The totality sheds light on dilemmas that preoccupied the Jewish community in the State’s nascent days, portraying an intricate local existence, a jigsaw puzzle combining influences of the cultural melting pot, Arab-Jewish relations, confrontation of war and death, patriotism and the naïve desire to establish a social utopia here.

While the Museum’s collection is far from the European ideal of a hoard of masterpieces just as Petach Tikva is far from Rome, in many senses this is where its power lies. Levy toys with this gap, with the fantasy, enhancing the assumption that the collection’s validity, vitality, and significance are not necessarily embodied in its aesthetic or intra-artistic values, but rather in its being a means to study and reveal the fantasies which characterized the decisive moment in the history of the State. Levy’s gaze shifts between the empathic and the ironic, the appreciative and the patronizing. Her lens does not delve into each of the individual paintings; rather—like Panini—she captures the whole, and leaves it up to the viewer to choose on what to focus. The collection items on display, hung on the walls of the Mazor Mausoleum in the faint nocturnal light, are shrouded by a mesmerizing mysticism which holds one’s glance. When the blinding Israeli morning light rises on them, a moment before the camera can no longer bear it, and the themes of the paintings grow clearer, we awaken from the magical illusion into the chaotic, violent, and complex Israeli reality.