Raya Bruckenthal: Perek Chelek (Portion of the World to Come) 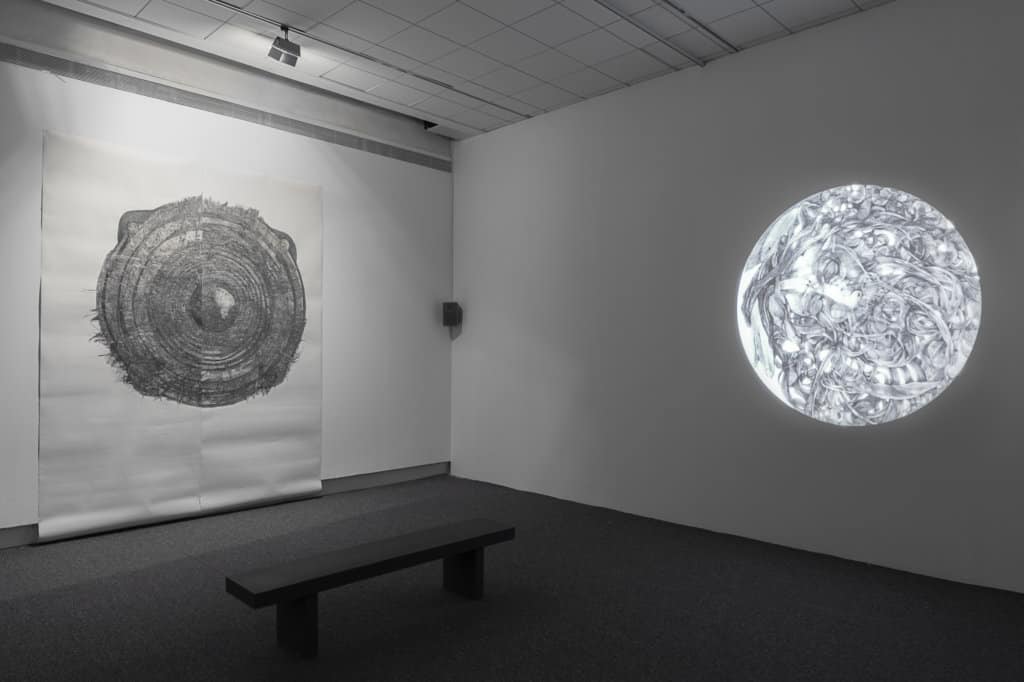 Raya Bruckenthal׳s exhibition disintegrates reality to establish other halls of consciousness in its place. It leads us between sites of compressed drawing and images of excess and glamor to ethereal worlds of sound, music, and language, which do not strive to structure consciousness, but to show its metamorphoses, its constituent parts. She invites us into the monumental halls she has erected so they may lure and mesmerize us, dizzy us without our touching the objects themselves. The convergence and depletion experienced in them call for exploration of the boundaries of reality.

The title of the exhibition, Perek Chelek (Portion of the World to Come), is drawn from Chapter 10 in the Talmudic Tractate Sanhedrin, which deals mainly with redemption and Messianism, the world to come and the resurrection of the dead: ״All Israel have a portion in the world to come,״ as reads the Hebrew version. The English translation omits the word ״Israel״; indeed, for Bruckenthal, everyone has a portion in the world to come, not in the eschatological sense of the end of times, but in terms of the presence of inspiration and stretching the boundaries of consciousness in contemporary life. The term chelek (Heb. portion) is described, on the one hand, as a spiritual reward given to the righteous; on the other hand, it has a tangible, corporeal dimension, which assumes the existence of other similar portions, like the vertebrae or fragments that make up the whole.

Bruckenthal׳s pursuit of the earthly manifestations of spirituality in its various aspects is set in motion by three medium–specific parts—sound, sculptural installation, and drawing. The work Tzadick Katamar (Heb. The righteous shall flourish like the palm tree)—

a sound piece composed by Bruckenthal and performed by Ido, her older brother—is played at the heart of the exhibition. The work is a vocal rendition of music composed by Louis Lewandowski in 19th century Germany for biblical verses (Psalm 92) that came up in conversations with her younger brother Hillel. The conversations revolved around the possibility of self–expression through liturgical singing; the place of personal expression in religious music; and the relationship between music and voices in the context of the human confrontation of threshold states between inner–psychological life and the changing reality. The different voices emanate separately from several loudspeakers, and their splitting helps in searching for the distinct voice in the whole fabric of sounds, which serves art and at the same time represents the multiplicity of voices in one׳s mind and consciousness.

Music׳s ability to touch on the nullity and abstraction of things in the world is confronted with the visual elements as well as the act of drawing, which captures an infinity of images embedded within each other, parts of being stratified and tangled, waiting to be unfurled and unraveled. Thus, in a space that has become a poetic expanse, viewers move from one speaker to another, while observing a large–scale drawing. Projected on the wall is the drawing Hillel the Elder, based on a legend from Tractate Yoma, describing the poverty of Hillel, who was unable to pay the entrance fee and was denied admittance into the study hall. Eager to continue learning, he climbed up to the roof to listen to the sages through a skylight, and froze in the snow. The window׳s blurred transparency and the blocked sunlight made the sages look up and notice Hillel׳s face. The drawing comprises fragmentation and splitting of images into segments and patterns that create a kind of stained glass window, but unlike the stained glass windows in cathedrals and the colorful light they let in—here a hall of drawing is created based on a gray scale.

Installed in the adjacent space is a sculpture of a spiral staircase, ostensibly leading to some upper floor, with gilded, etched brass plates on it. The quasi–stately stairs represent such phenomenon as new money and social mobility in films like The Great Gatsby and TV series like the 1980s Dynasty. At the same time, the staircase and the gilded plates on it call to mind places of worship, signifying the possibility of spiritual ascension and the link between the earthly and the heavenly. The light emanating from the upper windows, and in fact reflected from the plates, further enhances the combination of architectural–design thinking and religious motifs. The plates, in turn, conjure up memorial plaques and donor walls.

Only partly visible to the viewer, the stairs unfold an array of broken scenes: cinematic landscapes, such as the palm trees typical of Los Angeles and Miami, but also Bruckenthal׳s childhood views in Tel Aviv. Images from Hitchcock׳s films Vertigo and Psycho, centered on the movement between reality and imagination; characters from the TV series Dynasty; drawing–decorative elements related to Art Nouveau, and especially to the work of English artist Aubrey Beardsley, whose illustrations accompanied Oscar Wilde׳s writings. Wilde׳s own figure is etched on the plates, alongside fragments of the figure of the Happy Prince—a statue standing in the center of a city in Wilde׳s eponymous story, where the soul of a flesh–and–blood prince who died before ever experiencing real sorrow resides. From the heights of its tall column, the statue witnesses all the suffering of the poor city dwellers. He asks a swallow left behind when its flock migrated to pull out the precious stones and leaves of gold adorning his statue and distribute them to the poor. With the onset of winter, the swallow dies in the cold, and the statue of the Happy Prince, which had grown shabby, is dismantled by order of the mayor. The statue׳s remains and the dead swallow are thrown in a dust heap, where they are collected by an angel who deems them the two most precious things in the city, taking them to the heavens.