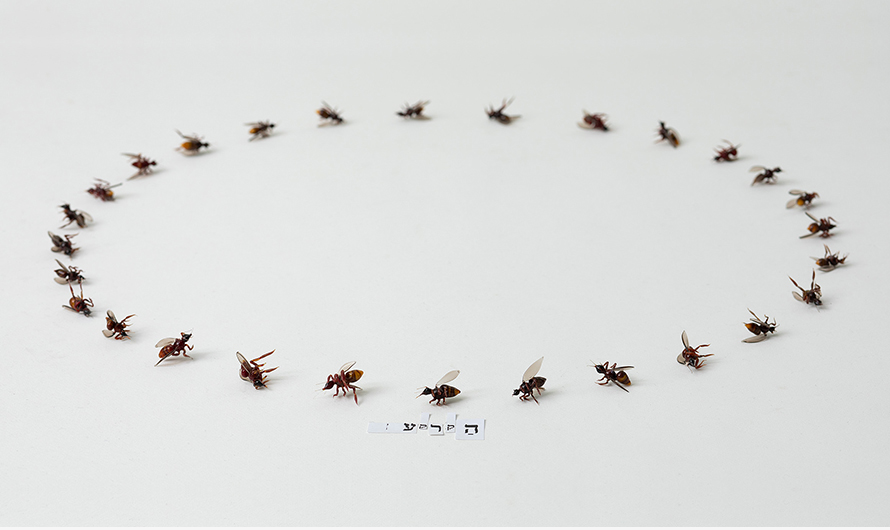 Dafna Kaffeman’s solo exhibition is a sculptural array of plants, set along the walls like a silent dance. Based on a visual lexicon she developed over the last two decades, Kaffeman has created images of local flora (whether indigenous or ones brought to Israel and now part of its landscape)—pine needles, ears of wheat, aerial roots of ficus trees, terebinth (Pistacia palaestina), Chinaberry tree, lantana, anemone—by processing glass with a blow torch. Interspersed among the plant images and texts are tiny sculptures of frozen, silent wasps. The decision to create plants similar to the original in both size and details, as per the tradition of botanical and entomological illustrations, serves Kaffeman’s desire to decipher the complexity of the plant and the insect through artistic means.

The meticulous workmanship of the familiar plants and insects is striking. It lures the viewer to observe them at length, examine them, and indulge in the magnificent artistry. But within all of this emerges a discord, an objection to the beauty associated with the representation of nature. The viewing gaze wanders along the walls, on which the plants hang individually or in clusters, in chains or in ceremonial circular formations. Accumulations of aerial roots are fastened to the wall alongside ears of wheat and a single anemone flower, installed naked and without majesty, devoid of the spectacular backing of museum showcases. This detachment reveals the fragility of nature and culture, the shattered childhood memory, the ideals associated with love of the land exposed in their ephemerality.

Kaffeman links the visual representation of the plants to the ideological-national study of the local flora and fauna, and its bequeathing through education since the beginning of Zionist settlement. Wheat, for example, was the first plant she chose to create in glass, as it marks the domestication of wheat as part of ancient agriculture in Palestine—as well as the agronomic research that accompanied the colonial settlement and occupation of the region. An ear in the field (shibolet basadeh), woven into the folklore of the labor settlement and Israeli existence, becomes, under Kaffeman’s hand, an abandoned ear, the object of a gaze whose beginning is nostalgic and its end—defiant.

The floral scenery draws the audience in, to linger in the exhibition and figure it out—but this is not a leisurely stroll, as it is disrupted by a running text that accompanies the wanderer at the foot of the walls. The text consists of several sources—e.g., quotes from the book Plant Life in Experiments (1931) by Yehoshua Margolin, a natural sciences teacher at the Mikveh Israel Agricultural School, and founder of the Biological Pedagogical Institute in Tel Aviv, which opens with guidelines for behavior in the laboratory and for teacher-pupil relations: “Prepare all that is needed for your work in advance. Do not ask your teachers and classmates anything before you have tried to do it yourself. Write and draw in your notebook what must be drawn. Keep your voice down while working,” and so on. Excerpts from this book, dealing with roots and soil, the land and clinging to it, are mixed with transcripts of an indictment filed in May 2021 against Lidor Mark, who was detained after threatening police officers who demanded that his friend move a motor vehicle that was blocking the road: “Are you a fucking dickhead? You moron? Be polite, you jerk. I’ll break your arms. You’re in uniform and I don’t give a damn about you. You pair of liars, fuck you.” Into these quotes she weaves words extracted from the Alphabetical acrostic Thursday Selichot: “We have abased, betrayed, cheated, disparaged… made others sin.”

Whether written or oral, the texts lead the mental process at the core of Kaffeman’s work. These are always unusual texts, extreme manifestations of pathos or innocence, threat or denial, practicality or formality. As in her work with the plants, which she deconstructs and reconstructs using the blow torch—the texts, too, are cut from an existing text, letter by letter, and reassembled to form another text, which is reproduced and manipulated; a delicate embroidery of meanings, that outlines a visual route in the exhibition along the walls.

Kaffeman believes that language and its expressions in everyday life and in books precede the visual objects, serving as means to process and confront reality. The encounter with art, which touches on the beautiful, and at the same time stems from historical and news texts centered mainly on manifestations of violence and racism, generates an estrangement and reinforces the constantly changing and redefined power relations between landscape and language. In so doing, it reveals a major feature of Israeli reality, one which Israeliness tries to repress. Kaffeman’s work, in its unraveled, rootless layout, calls for dialogue of a different order.