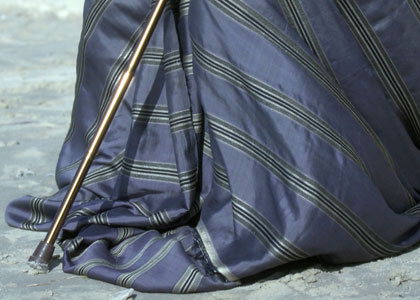 Female-sung eulogy, customary in Jewish congregations hailing from Islamic countries, is at the core of Itzik Badash’s new video work, Zala. Zala is an ancient Arab-Libyan designation for a keen wailer, the female medium who intertwines life and death in the female generational chain. Combining autobiographical, cultural and historical elements associated with the tradition of Libyan Jewry, Badash’s work delves into rites and rituals of life and death.
Badash’s family has set up a tribe of wailers, headed by Badash’s great grandmother, “Liza Zala.” Her family perished in Tripoli in World War II, and she has made her grief into a dirge, bequeathing this age-old tradition to the women in her family. Badash raises a great lament for this Jewish world which was cut off from its origins and customs, against the backdrop of the Holocaust of North African (and Libyan) Jewry, which was pushed to the margins of public consciousness.
In this video, Badash shifts the wailer to the public sphere, presenting her at the very heart of Israeliness, on the bare beach of Netanya, his hometown. His danse macabre is centered on the figure of a wailer he managed to find with great effort from the handful of wailers still left among the women of the Libyan community. Firmly rooted in the sand like a solid rock, wrapped in an oriental robe, she is withdrawn in a sweeping inner trance, her song vacillating between the folds of existence and desistence. The dramatic presentation of the lament as an aesthetic of grief is intended to create a community of mourning as part of a social and spiritual process which channels emotion towards cathartic release. Badash pits the single wailer as a leading voice opposite a group of women gathering around her, intermittently responding to her gestures and voice. This choreography of weeping, between a female solo and the show of the chorus, produces an orchestrated musical-theatrical array which heightens the power of the spiritual outpouring.
Badash fuses together symbols of affluence and death, Jewish and Christian myths, with a range of meanings pertaining to transformation and change. Thus, against the backdrop of the song of sorrow, the narrative disintegrated, remaining obscure. The work brings contents that have been repressed in Israeli culture to the fore, reinstating a popular traditional practice that has not been granted profound attention in contemporary art to the center of cultural discussion.
With the support of the Or Shalom Center for the Preservation of the Heritage of Libyan Jewry
The work will be screened at the Spot, the Museum’s cinema and media space.