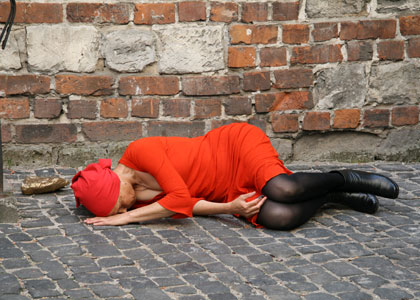 A city is a construct, a never-ending story, a fixed benchmark, a pit of memory, a place where meaning is created, and a constant source of inspiration. The city is the subject of the exhibition “Operations on Places.” The featured works refer to a specific place—the public sphere of the city of Lublin—but the exhibition’s overall concept is not restricted to this city. “Operations on Places” explores the city as a concept, as represented by the case study of Lublin—its history, identity, and physical map.
The point of departure for the show is Mirosław Bałka’s video piece, MapL, depicting the Lublin city map installed in the former Nazi concentration camp Majdanek. This work sets the tone for all of the other works in the exhibition—mostly video performances devoted to specific sites, which extract feelings and sensations from the city map or project new emotions thereon. All the works were created in reference to particular locations with an audience in mind—whether a lone pedestrian or an imaginary collective city dweller; at the same time, however, they address the cityscapes per se, regardless of prospective viewers.
Some of the works represent an approach that, paraphrasing Milan Kundera, may be called “the unbearable lightness of city.” Philosophical-existential works and history-minded, memory-related works are juxtaposed with scenes of quotidian reality and bustling street life, as well as with attempts at communication in search of a kind word.
A machine for living and a system of communication, the city reveals itself as a highly complex, unpredictable phenomenon. Exploring, discovering, and confronting it, the artists engage in a temporal and spatial dialogue with the urban sphere. Whether the city streets are an apt place for art remains an open question, but what is certain is that art can definitely be found in them.

All the works courtesy of the artists and Galeria Labirynt, Lublin 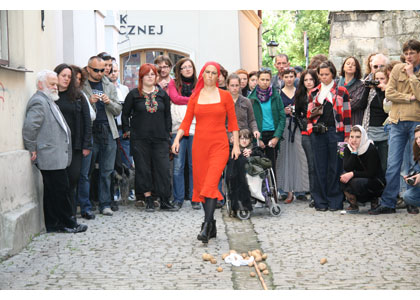 The performance of the duo Nice Words took place twice, in 2017 and in 2018, at the Lublin Central Bus Station—a place of transition between East and West, through which numerous Ukrainian migrants pass every day. The artists asked passersby to write down their wishes for the city of Lublin on the occasion of its 700th anniversary, and the performance was based on a simple exchange: a nice word for a good wish. According to the artists, “the action is devoid of irony, critical distance, or hidden messages. It is as simple as it looks.” The same action was repeated in the city of Petach Tikva before the opening of the current exhibition, and postcards from these actions are incorporated in it. 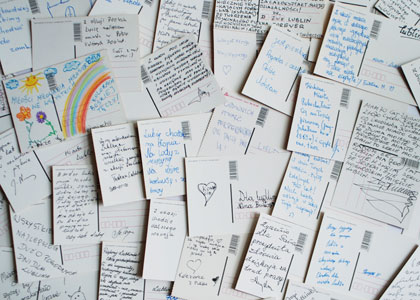 Arutiun Sargsyan’s performance took place at Teatralny Square in Lublin. Blindfolded, dressed in a black suit with rolled up sleeves, and barefooted (his shoes arranged parallel to his chair), the artist sat motionless and silent in the middle of the square. Crowds of people rushed around him and cars passed by, but all seemed to ignore him. The title of the performance alludes to the tragic events of that year, 2016—the terrorist attacks and massive migration. The hashtag in the title refers to virtual reality and mass media, while the Roman numerals symbolize power. The artist tries to resist the system, but all he can do is expose his weakness and helplessness. 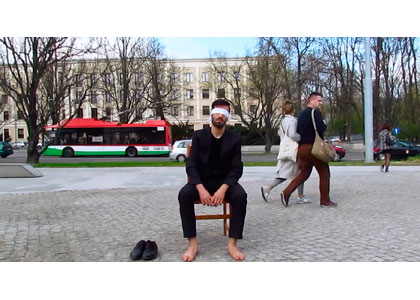 The video piece MapL consists of fragmentary filming of the Lublin city map exhibited at the State Museum of Majdanek, the former Nazi concentration camp. The map comprises black lines which stand for streets and rivers, and red rectangles which symbolize commemorative sites. The film’s abstract aesthetics calls to mind constructivist compositions as well as modernist forms in general.

Inspired by images of the Yugoslavian war broadcast on Israeli television, Disposition was performed by Adina Bar-On (in 2001–10) in numerous venues throughout the world, adapting it each time to the particular, local context of the respective city. In Lublin, it was performed in 2009 over more than two hours as a walking tour along a chosen route in the urban sphere. Bar-On opted for forgotten places: rundown backyards, dumps, streets, and buildings reminiscent of pre-war times. Wearing a red dress and a shawl, she used gestures and simple props to produce suggestive images: a woman in a landscape, a woman with a vehicle, a woman with a flag. The interactions provoked between the artist and her audience as leader and followers played an important role in these performances. 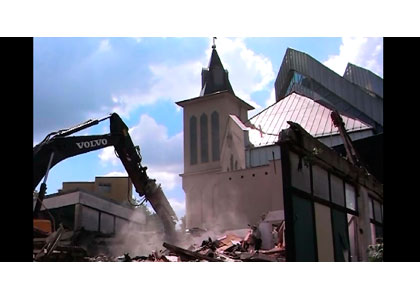 The video begins with a dictionary definition: “Liberation—emancipation from a state of subjugation by some governmental power.” In his performance, Cezary Bodzianowski strolls in the center of Lublin, collecting advertising leaflets. The camera follows his journey in the urban space, recording intense images and sounds. He seems to be going with the flow, aimlessly. Meanwhile, he tries to realize his plan, bringing a private mission to an end. A simple gesture of throwing hundreds of leaflets into the bin turns out to be an ironic gesture, attesting to the impotence and entanglement in a reality typified by excess of information. Bodzianowski consistently hones his self-invented performance style called “minimal performance” or “minimal action.” 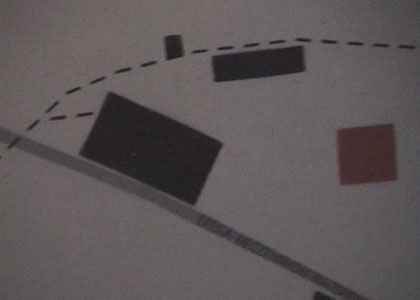 The video piece MapL consists of fragmentary filming of the Lublin city map exhibited at the State Museum of Majdanek, the former Nazi concentration camp. The map comprises black lines which stand for streets and rivers, and red rectangles which symbolize commemorative sites. The film’s abstract aesthetics calls to mind constructivist compositions as well as modernist forms in general. 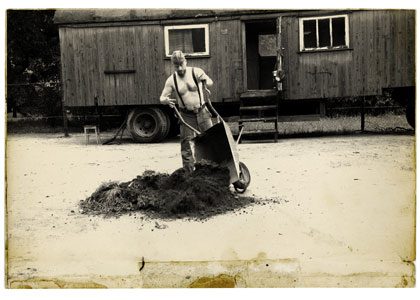 Robert Kuśmirowski created an object out of leather, old-fashioned bag and photographs from his performance “+/-“. During the performance which took place in Lublin in 2009, he was wearing a costume proper for a physical worker from the communist era in Poland. The photos were taken in front of an old wooden caravan, a place where workers used to temporarily live. Black and white yellowed photos suggest that the event took place dozens of years ago. The object looks like something found in an archive. Kuśmirowski is often called “the genius of fake” as most of his works are based on the reconstructing or copying of old objects, documents, photographs, or making imitations.