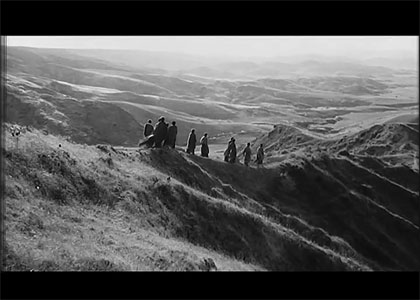 Amir Yatzivs film creates a hybrid between the seen and the heard, between image and sound. This strategy creates a seeming reality convincing maybe, but not real. Thus the film connects with the cluster of shows currently exhibited at the museum, dealing with speech and body gestures that are often empty of content or actual facts. The video operates on the seam between what is and what is invented.
Yatzivs film refers to a tour of the Holy Land made by the Italian filmmaker Pier Paolo Pasolini in 1963, in order to scout for locations for his projected film The Gospel According to St. Matthew. The director expressed the feelings and thoughts he had during the journey, and mainly his disappointment with the physical and human landscape he saw, in the first person voiceover of his film Sopralluoghi in Palestina (A Visit to Palestine). The country, it turns out, did not live up to the expectations of the legendary director, who eventually decided to shoot his film in Italy.
In his work This is Jerusalem Mr. Pasolini Yatziv seemingly responds to the renowned filmmakers grievances. He juxtaposes the sound of the documentation of Pasolinis visit to Israel with images taken from his film The Gospel According to St. Matthew. While the original film is disengaged from the stream of consciousness, its text consisting only of external speech, Yatzivs film relies entirely on internal monologues. These accompany the long shots that linger on the faces of Christ and of the people he encounters, and on the landscapes of Italy that simulate the landscape of the Eretz-Israeli desert. Thus, when Christs figure appears on the screen in Yatzivs film, we hear the echoes of Pasolinis thoughts, and when he surveys the magnificent landscape of Italy, we hear the description of the disappointing shabbiness of the Israeli landscapes. In fact Yatziv recreates the location-scouting tour, but in his version Christ appears in the role of Pasolini, and the twelve apostles play the production team. The crossbreeding of Pasolini and Christ undercuts the filmmakers megalomania, and his choice to replace the modest historical landscapes with the impressive landscapes of Italy highlights cinemas power in maintaining fantasy at the expense of reality.