The Exhibition that Never Happened: The Naum Aronson Case 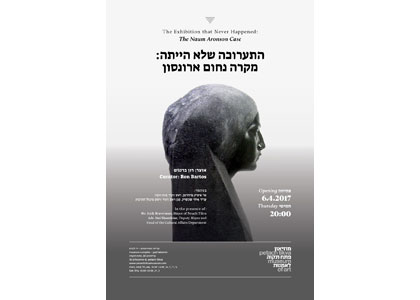 While stored in the cellars of the Musée du Louvre in Paris, Naum Aronson’s sculptures found themselves in limbo. With the outbreak of the Second World War and the German occupation of Paris in 1940, the prominent Jewish sculptor escaped to the United States. Before leaving, he entrusted his artworks to the Louvre Museum – a few of his sculptures that were displayed in the Museum in the past, and others from his atelier, which he had to clear. At this point in history, the sculptures’ future hanged in the balance between the horror of “hell” and the salvation of “heaven”: the prospect of “hell” threatened to doom the works to the fate that befell many other art treasures plundered by the Nazis. On the other hand, the prospect of “heaven” could have ushered in a bright reality for Aronson’s sculptures, the realization of which would have been as simple as being brought from the cellars to the galleries floor, and displayed in the world’s most famous museum. As fate would have it, it was “hell” that the unfolding of history conferred on Aronson and his art.
Naum Aronson’s sculptures were confiscated by the Germans, along with countless other artworks from the Louvre’s collection, and loaded onto a train headed towards Berlin. Not eager to complete this task, the French rail workers decided to prevent the looting of these masterpieces. And so, they “traveled” with the train across France rather than make their way to Germany, and at the opportune moment, handed its contents to the Resistance in the countryside. The Jewish members of the Resistance transferred Aronson’s sculptures to the care of a children’s home in the French village Les Andelys, where they remained after the War. In 1952, deputy mayor of Petach Tikva David Tabachnick joined a delegation of the Zionist Organization in a visit to that children’s home, which by then had already housed the orphans of the War and was named after Aronson. There, Tabachnick was surprised to discover Aronson’s sculptures scattered around the courtyard, where the children had put them to use as targets in stone throwing games. Upon his return, he arranged for the sculptures to be brought to Israel and added to the art collection of Yad Labanim Museum, today’s Petach Tikva Museum of Art.
The Exhibition that Never Happened: the Naum Aronson Case, wishes to turn back time to offer a late redemption of sorts to Naum Aronson’s sculptures, and imagine their return to the Louvre – the “heaven” that was prevented from them by history.
The Museum’s collection gallery was transformed into the semblance of the Louvre’s sculpture galleries, with a display dedicated to the works of the Jewish sculptor Naum Aronson. Alongside this revisit of the Parisian museum and the middle of the 20th century, “the Louvre” at Petach Tikva Museum of Art is also a temporary and imaginary Israeli branch of the famed museum, at a time when the Louvre in Paris acts as the flagship branch of museums that bear its brand name. Thus, in 2012, Louvre-Lens was inaugurated in the mining town in the north of France, and a new extensive branch has just opened in Abu Dhabi (the emirate will pay France almost 1.5 billion dollars for the use of the brand name and loan of artworks from the Museum’s collection, which includes artifacts and artworks originating in the area to which they now return). Obvious differences aside, and keeping in mind the real fate that befell Naum Aronson’s works, the imaginary Louvre in Petach Tikva is also informed by the contemporary restitution of artworks plundered by the Nazis. This exhibition therefore constitutes a symbolic return of Aronson’s sculptures to the Louvre Museum and to their French context, while presenting them in the Israeli museum that saved them from destruction and oblivion.
History cannot be re-written, but alongside the opportunity to present Aronson’s sculptures at the Museum’s collection gallery, this exhibition can also serve as a platform for reflection on questions such as: what would have been the sculptures’ artistic value if they were not plundered by the Nazis? Or alternatively, what would have been their cultural significance if they were displayed in the Louvre – one floor above their place of storage? What would have been the historical significance to Jewish culture for an artist like Aronson to gain such recognition? What is the nature of the canonization processes that doomed Aronson and his sculptures to oblivion, while they could have, perhaps, grant him fame? And to follow this line of thought, what would have been Aronson’s status in the history of art (including Jewish-Israeli art) if the historical verdict would have been a different one? And venturing beyond Aronson’s case, we will ask what other artists and artworks disappeared under the dark shadow cast by the Nazi regime (and by regimes and governments in general) on art and culture, and what could have been their fate if the course of history had been different?
The dormant potential that was embodied in the works when they were stored in the cellars of the Louvre, is realized now with a symbolic act of redemption: taking them from the recesses of the cultural subconscious (the museum’s cellars) to the consciousness (the display); extricating them from the “death” of the storeroom (the correspondence between the museum and its storerooms and a graveyard is a known and familiar one) for a second life; and examining the fictional possibility of “heaven” instead of the factual historical “hell.”

Naum Aronson was born in 1872 in Krāslava, a town in the Vitebsk district in Russia (today’s Latvia) – one of ten children in a traditional Jewish family. He started sculpting at an early age, and when he was 16 traveled to Vilna to attend the Ivan Trutnev Art Academy. In the wake of anti-Semitic incidents, Aronson left the school at the end of the first year, and returned to his town in the aim of saving money to go to the art capital of the time – Paris. And so, in 1891 Aronson arrived in Paris on his own, with very little money in his pocket and without speaking any French. He earned a living as a stonemason and lived in a small attic, which also doubled as his atelier. Practically a self-taught artist, Aronson lacked serious formal artistic education: in Paris, he spent a year at the School of Decorative Arts, learned sculpture in the atelier of Hector Lemaire and at the private art school Académie Colarossi, as well as with the master August Rodin (who, according to various sources, he also befriended). From 1897, Aronson starts to take part in formal Salon exhibitions on a regular basis, which garnered him recognition and an invitation to become a member of the Salon’s jury. In the years following the turn of the century, his sculpting career flourished, and he participated in prominent exhibitions in Paris (among them the Exposition Universelle of 1900, exhibitions in the Louvre, in the French Salons, and more), received commissions to sculpt portraits, outdoors sculptures and monuments, cultivated collectors of his works, and was a prominent figure among the Jewish intelligentsia in Paris. As an esteemed Jewish artist, Aronson engaged in correspondence with the first mayor of Tel Aviv, Meir Dizengoff, in the 1930s, in which the Mayor invited him to come to Israel and visit Tel Aviv. He even promised the artist a gallery that will be dedicated to his sculptures in the courtyard of the Dizengoff House (the first residence of Tel Aviv Museum of Art), but Aronson chose to remain in Paris, and served as a member of the French Friends of the Museum.

With the occupation of Paris in 1940, Aronson escaped France to New York via Spain, where he received a warm welcome. Upon his arrival, the Jewish American art journal The Jewish Pictorial Voice even printed an article titled “Hitler’s Latest Gift to America.” Aronson lived and worked in New York for three years before his death in 1943. Many of his sculptures were ruined and others are found in collections of Alexander the Third Museum, Saint Petersburg; Academy of Fine Arts Museum, Saint Petersburg; Leo Tolstoy State Museum, Moscow; Luxembourg Museum, Paris; Pettit Palais, Paris; The Museum of Jewish Art and History, Paris; Beethoven House, Bonn; The National Art Gallery, Johannesburg; The Israel Museum, Jerusalem; Tel Aviv Museum of Art; Ein Harod Museum of Art; Hecht Museum at the University of Haifa; Petach Tikva Museum of Art, and other public and private collections. In 2000, a comprehensive exhibition of Naum Aronson’s works was curated at Petach Tikva Museum of Art by Ruth Manor.