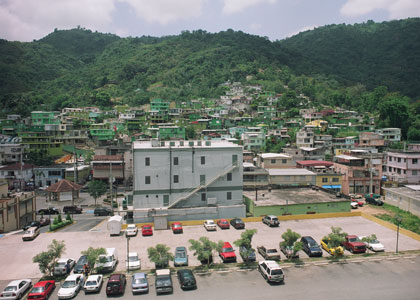 Puerto Rican artist Chemi Rosado Seijo creates mainly artistic interventions pertaining to a place or a community and their history, generally via communal work. Such is also the project whose documentation is presented in theexhibition: a type of social archive of artistic acts performed on the “canvas ofthe everyday,” joining contemporary art discourse, social activism, and traditional culture with architecture and landscape.
Located on a hillside south of San Juan, El Cerro consists of slum districts with a poor, negative socioeconomic image. Its dwellings, which were constructed without a plan, began to appear in the 19th century. They were intended to house workers from the local coffee plantations, and are still occupied by their descendants. Striving to change the image of the village, Rosado, in collaboration with social workers, artists, and volunteers, harnessed the members of the community to paint the façades of over one hundred houses in diverse shades of green. A color associated with the Puerto Rican Independence Party, it made them assimilate in the local landscape and topography as if they were an integral part of the indigenous flora. His act began with visits to the residents’ home, presenting sketches and asking to join the painting initiative. The inhabitants initially suspicious and apprehensive responses were soon replaced by enthusiasm and thrill for the opportunity to take part in the giant “painting
.”
This environmental artwork—in homage to the spontaneous-popular architecture which evolved locally—proved itself to be highly influential with the interpersonal relationships in the community, contributing to bringing neighbors together and boosting the sense of belonging and local pride. Artists Raimond Chaves and Pablo León de la Barra operated in the village concurrent with Rosado Seijo. The former
printed a local street newspaper (which he suspended on clothes lines), and the latter staged a local museum whose artifacts were collected from villagers’ homes.The monumental “mural” of the village painted green became a tourist attraction.
The interview courtesy of Creative Time