Karim Abu Shakra: What is Met by Me as Face 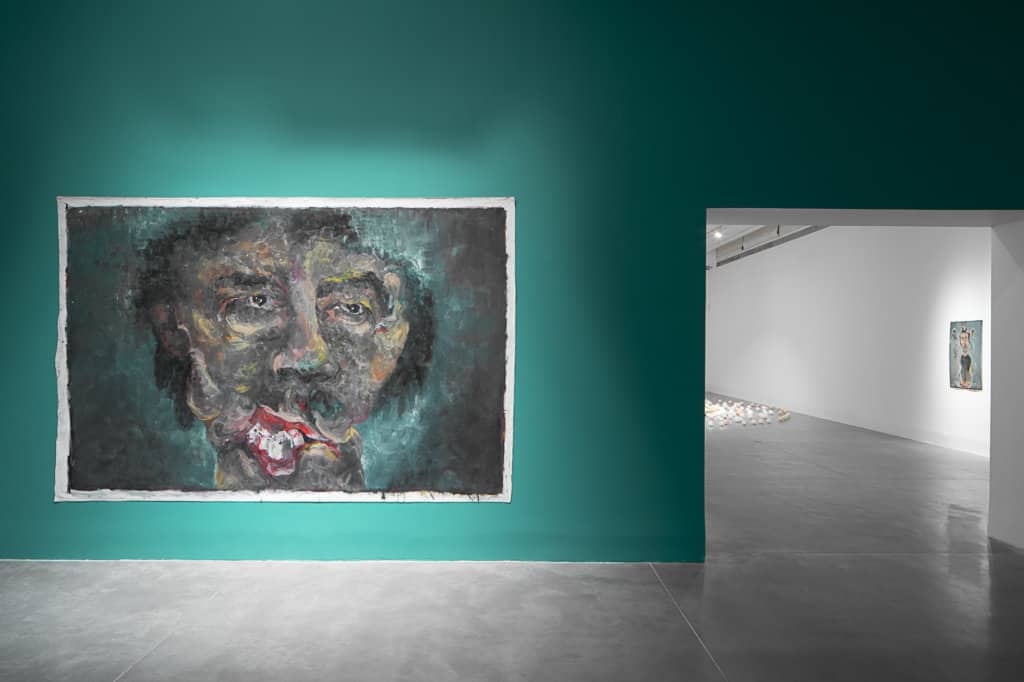 I am the guest and the host in my house,

I looked around at all that space contains, I found

no trace of me, perhaps… perhaps I was never here.

[ Mahmoud Darwish, As If I had Become Happy ]

Karim Abu Shakra (b. 1982, Umm el–Fahem) often paints portraits, mainly self–portraits. The subjects in his paintings are shown in full length, standing in a frontal position, looking straight ahead at the viewer. The exposed, solitary figure stands before us motionless, as if it had emerged from the thick fog of the monochromatic, abstract color field, which infuses it with a sense of mystery and softness. The figure stands still before us, at arm׳s length, yet appears as though it has come a long way from its uncanny world before reaching us. At times, the face appears calm, pensive, and indrawn; at others it is distorted and effaced, and the mouths are accentuated and crooked, as if screaming in pain.

This calls to mind the tormented portraits by English painter Francis Bacon, who often addressed the difficulty in portraiture, maintaining that the challenge in depicting a figure is to ״be able to suddenly make the thing there in a totally illogical way but that it will be totally real.״ The art of portraiture is indeed complex due to the desire to capture something profound concerning the sitter׳s innermost essence, even in the case of a self–portrait. Knowing that such an endeavor is doomed to fail, however, we may settle for a depiction of our vague sense of ourselves, or for capturing the elusive impression left in us by an individual who passed in our life, briefly or at length.

The face in Abu Shakra׳s portraits seems to be looking at us, as we observe it. The intimate encounter with the face is heartrending, spawning a feeling of anguish as we stand and linger before it, trying to delve into its essence. Ugliness and eccentricity mesmerize our gaze; vulnerability and delicacy evoke a sense of aversion and empathy at the same time. Is it the difference that elicits discomfort in us, or rather the likeness to ourselves?

Perhaps it is the intimacy—the audacity of the unapologetic gaze turned at us, which forces us to actively tear ourselves away from it, precisely because of its vulnerability and accessibility—that burdens us so? French philosopher Emmanuel Levinas regarded the other׳s face as an ethical point of departure, a reminder, and a metonymy for otherness in its broad sense. The other׳s face, he argued, is turned at us by virtue of its being defenseless and exposed. The directness and the complete sincerity of its gaze compels us to respond to their call, the call of otherness as a responsibility for the Other, or rather for that which indeed pertains to me, which ״is met by me as face.״