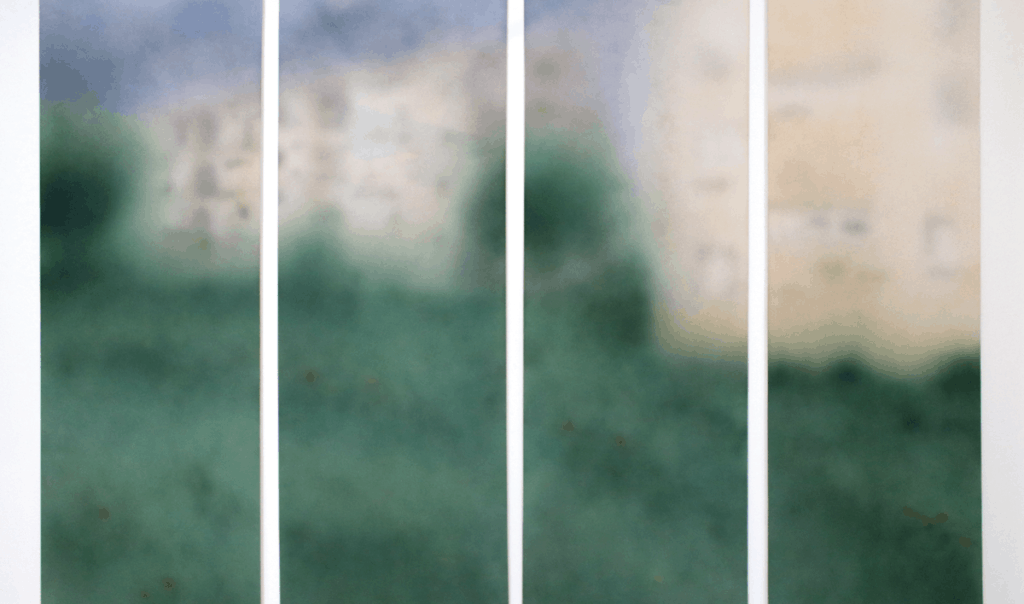 Elena Rotenberg’s solo show, Seen from Here, is an homage to the architecture of the Yad LaBanim House, where it is held. Built in 1953 at the initiative of the Haganah military organization and Petah Tikva municipality, the structure is considered the first commemorative venture of its kind in Israel. Its foundation reflected a new view, one that wished to replace silent monuments and tombstones with a “living house” – a shift from mourning the dead to threading their memory into everyday lives. “The House,” as it is still called by many, was designed as a meeting place where the bereaved families could gather and support one another, but also as a center of a wide range of artistic, cultural, and educational activities for the people of Petach Tikva.

Without a known precedent to this type of commemoration, Yad Labanim’s planning and operation evolved over the years as a process of learning “on the go.” In their notes, its planners, architects Andre Leitersdorf and Iliya Belzitsman, talked about the challenges of planning a building as an impressive commemorative monument that at the same time will serve as a lively and vibrant public center. Not only that, they added, but “in the first stages, the actual guidelines for the activity to take place in the complex were quite unclear.”[1] For this reason, among other things, the complex was built in stages, and expanded during its first decade with the addition of the Krol Wing (now the Education Department offices), the historical museum, and art museum.

This room, which is now known as the “Collection Gallery” and dedicated to temporary exhibitions that explore the art collection, the museum complex, and the surrounding area, also embodies the changes that the complex underwent in its seven decades. Originally called “The Hagana History Room,” it first housed a historical display of the organization’s chronicles. Over time it was repurposed and used for children and youth educational activities, and even earned the moniker “The Flower and Peace Room” after the flowers that were painted on its walls after the Yom Kippur War by pupils of the nearby Yad Labanim School.

In the 1990s, the building underwent architectural changes, in which the exhibition hall on its top floor was converted into an auditorium and its northern windows were sealed. In the early 2000s, the entire complex underwent extensive renovation. On the backdrop of the Second Intifada and associated security concerns, the passage from the Independence Park was restricted and replaced by a raised terrace, the complex was fenced and the main gate moved to its current location, in front of the Petach Tikva Museum of Art. The gallery’s windows were also sealed and it was reinstated as a display space.

Elena Rotenberg’s exhibition is based on historical research that traces the architectural genealogy of Yad Labanim complex. In their location and dimensions, the eight paintings she created especially for the space of the Collection Gallery, represent the glass windows of the original building. The views of the buildings and the overgrown courtyards seen from them are drawn from Ramat Warber neighborhood, where the museum is located, as though wishing to reconnect the building to its surroundings.

Rotenberg uses an Airbrushing technique, in which paint sprayed with an air compressor creates diffused and blurry shapes, allowing her to cover huge areas quickly. Her unique style is inspired by graffiti and is reminiscent of pixelated digital photography, which comes into focus as you step away from it. Like a fuzzy memory, the mundane cityscapes emerge before the spectators who pause in front of them, bringing to mind the paintings of flowers and houses that adorned the room’s walls for decades. Even if it cannot overcome the actual fences separating the museum from the neighborhood, this gesture casts a critical eye on the architectural change and sets the architectural infrastructure and its transformations as a political and social marker and as a subject of discussion.

The photographs and archival items in the exhibition are courtesy of the Oded Yarkoni Archives Historical Archive of Petach Tikva.

We would like to thank the Leitersdorf-Belzitsman office archive, Ora Bauer, Drorit Gur Arie, Galia Duvidzon, and Noni Yaron for their contribution to historical research.

[1] Andre Leitersdorf and Iliya Belzitsman, “The Commemoration Project in Petach Tikva”, from A Decade to the Yad Labanim House, 1963, Petah Tikva Municipality (in Hebrew).