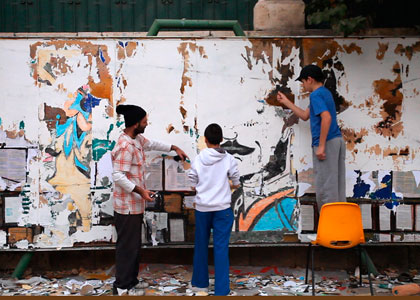 The Muslala group brings artists and social activists together, most of them residents of Jerusalem’s Musrara neighborhood and the adjacent “seam” area at the foot of the Old City, which was a “no man’s land” between 1949 and 1967. This charged area was also the habitat where the Israeli Black Panther movement emerged, and it serves as a microcosm for the multiple layers of this intricate city: the Old City walls; secular, ultra-Orthodox, and Arab residential neighborhoods, poor and affluent; the light rail tracks and the highway crossing Jerusalem from south to north. The members of the group strive to introduce social change through diverse modes of expression—some publicized, others as acts of a “commando guerilla” or a coded intervention in the social sphere. The group organizes ritual acts, performances, and guided tours, installs art on the city streets, and has even planted a communal garden and set up a workshop for neighborhood residents. Another branch of activity is the Self-Broadcasting Authority—a broadcasting body located in a mobile caravan, initiated by Guy Briller, one of the group’s leaders. The Authority makes journeys and holds meetings with cultural figures and random audiences, which are documented and broadcast in real time, without the mediation of the artistic establishment.

The Nomansland project consists of three journey chapters, two of which took place in Jerusalem during 2011. The third will be made during the show; it will start in Petach Tikva, and extend to additional cities in the course of a week, while being transmitted via an improvised “broadcasting station” set up inside the Museum. The three journey chapters outline the image of a territory devoid of clear identity, the backyard of the visible and explicit, a no man’s land—a term which conceals a double negation: negation of the ownership over the space and negation of man’s sovereign status. This twofold detachment articulates the complex nature of this arena in particular and Israeli space in general.

In their action Nomansland, the group members adopt the travelogue genre, which enables the introduction of artistic practice into the public sphere on the seam separating art from life. The journey serves as a catalyst for breaking out of the box of traditional perception amounting to movement between the studio and the institutional exhibition space, while expanding the artistic act and its impact on society.

The first journey in the trilogy—Measurements and Observation (March 2011)—was held in Briller’s mobile caravan/studio in the parking lot of the Musrara neighborhood, with the participation of artists from different fields: performers, visual artists, dancers, architects, musicians, and intellectuals. The interdisciplinary act within and in reference to a defined area transformed into a discussion of a space’s ability to embrace differences and multi-culturalism. It was broadcast from the caravan/studio to a website, which also included edited video clips from the field, texts, photographs and GPS coordinates. The second chapter—Visit Nomansland (October-November 2011)—challenged the limits of linear time and perception via works and actions which disrupted order and logic, breached boundaries and laws, and shattered ethos and myth. Testimonials from these acts are screened in the control room on the left, among them: a guided tour in the light rail stations, which transforms routine travel into a journey of redemption relating to the phenomenon known as the “Jerusalem Syndrome”; a subversive installation of a street sign for “They-Are-Not-Nice Alley” (alluding to Golda Meir’s assertion about the Black Panthers); or an illusive patrol of a white soldier whose visibility and identity are blurred.

As opposed to the previous two chapters, which focused on the Musrara neighborhood, the current chapter, to be carried by Briller and Yuval Yairi, broadens the range of significations introduced by the notion of “nomansland” to utopian political and cultural contexts. In fact, it is a work in progress, which will begin on the exhibition’s opening night on the hill across from the museum, on the ruins of the partially destroyed dining hall of Kibbutz Givat Hashlosha. From there the journey will head toward other sites, and will be documented by live broadcast from the “control center” in the Museum alongside documentation of previous journeys. This combination of spaces—cybernetic, museum, and physical—is aimed at increasing the range of expression and influence of the project as a whole.