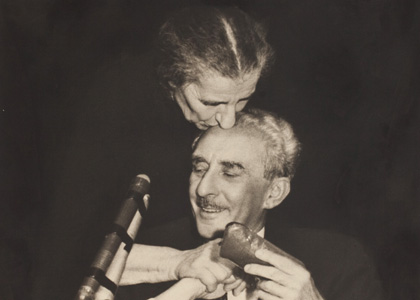 The exhibition explores the figure of the leader as manifested in Israeli art since the establishment of the State to the present, against the backdrop of the constant political and social changes in our reality. On the one hand, it presents manifestations of the “strong” representative leader as befitting the Zionist ethos: a visionary leader or one who is connected to the essence and roots of the place. These aspects are discernible, for example, in the portrait of the second President, Yitzhak Ben-Zvi, sculpted by Batya Lishansky, the sculpture of Berl Katzenelson by Ya’akov Lutschansky, or the elegant figure of Herzl in Hermann Struck’s print based on a 1903 etching. On the other hand, there emerges the personal, human facet of the leader, who appears before us “in slippers,” so to speak; this is true, for example, of the intimate surprising moment of a kiss between Golda Meir and Moshe Sharett, as captured in Nachman Abramowitz’s lens, or a photograph by an anonymous photographer depicting Ben Gurion holding a lamb in his arms.
The image of the leader, its presentation and marketing, are a prevalent concern among the contemporary artists in the exhibition: thus, for example, in David Reeb’s Security (2002), which blurs Ehud Barak’s figure, or the game of identities between victimizer and victim in a video piece by Boaz Arad, who intermittently assumes the figures of Prime Minister Yitzhak Rabin, and of his assassin, Yigal Amir. The marketing of the leader’s figure as a popular commodity, even its defamation in the form of a wallpaper pattern or an image on a merchantable bank note, is evident in Nurit Sharett’s video work, Identity (2003), which relates to the figure of Moshe Sharett, and in Zeev Engelmayer’s gleaming sequins work (1999), which is a part of a series of portraits made of inexpensive, ornamental materials.
The gap between the leader and his dream, on the one hand, and the harsh reality, the war and its heavy toll, on the other, also arises in some of the works: the image of the Binding of Isaac in Menashe Kadishman’s work—a scaled-down version created especially for the exhibition, of the artist’s well-known sculpture, The Sacrifice of Isaac (1982-85) installed in the concourse of Tel Aviv Museum of Art—or in a photograph portraying Michal Na’aman’s work, The Eyes of the Nation, installed on the Tel Aviv beach in 1972, which set out to protest the ideal of sacrifice and against the establishment which sanctifies power.
Texts and idioms that have become a part of the “silver platter” heritage are at the focal point of other works which undermine biblical myths, proposing a fresh reading of the Zionist myth, among them Michal Na’aman’s A Kid in Its Mother’s Milk (1974) and a New Young Victim (2009), or Shahar Marcus’s video piece The Fathers Have Eaten Sour Grapes and the Children’s Teeth Are Set on Edge (2008) in which the artist assumes the figure of a general, devouring the cookie-decorations on his uniform, only to regurgitate them while reciting Ezekiel’s Vision.
These days, when there is dire need for a head capable of spotting inclinations and introducing a new vision, there is a devaluation of the leader’s figure who comes under increasingly heated criticism from within and from without. These tendencies are manifested in the exhibition, assimilating to the lively public discourse in Israel about leaders and leadership. 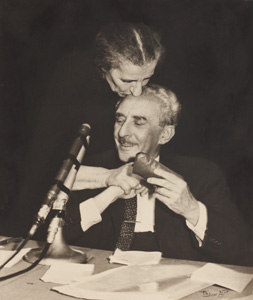 This intimate, surprising moment was caught in Nachman Abramowitz’s lens during the tenth Mapai Convention held on February 17, 1965, at the end of Moshe Sharett’s “wheelchair address,” one of the better-known and most influential he delivered in the last year of his life. In his speech, Sharett decisively rejected Ben-Gurion’s demand to establish a national commission of inquiry to review the Lavon Affair, thus endorsing Golda Meir’s and Levi Eshkol’s views. At the conclusion of the convention the majority of delegates voted against Ben-Gurion’s motion. The latter’s appeal to be named Mapai candidate for Prime Minister that same year was also denied.
At the end of the speech Golda Meir approached Sharett, kissed him on his forehead, and went on to deliver an even fierier speech on the same subject. Her gesture of appreciation for Sharett and support of his views may also be understood in terms of her acceptance of Ben-Gurion’s offer, several years earlier, to replace Sharett as Minister of Foreign Affairs; this may have been her way of asking for Sharett’s forgiveness.
In her autobiography My Life (1975) Meir related to the difference in temperament and opinion between Sharett and Ben-Gurion, maintaining that the two collaborated well until the 1950s. Sharett was a born diplomat and negotiator, whereas Ben-Gurion was a born leader and national fighter, she wrote, adding that the Zionist movement in general, and the Labor Movement in particular, benefited greatly from the combination of their talents, and even from the differences in dispositions and views.
The rare photograph is part of the Petach Tikva Museum of Art Collection. It is included in the group exhibition “Leaders” currently on display at the Collection Gallery, which juxtaposes the intimate, human side of leaders in Israel with their public and representative aspects, among them aggressive manifestations of colonialism, militarism, and bellicose values. Beyond the intimacy innate to the kiss, one is exposed to broader personal and political differences between Sharett, Meir, and Ben-Gurion in the mid-1960s.