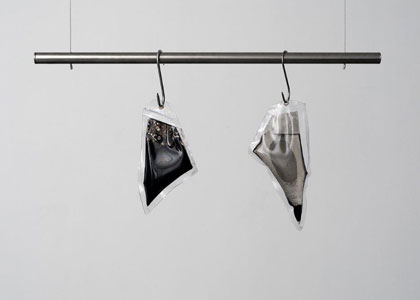 Yaara Zach’s installation Unreasonable Doubt is composed of several works, which appear as a series of reincarnations evolving out of one another. It is a largely black, almost monochromatic installation, in which materials and forms seem to flow from one piece to the other, echoing one another while tracing the memory of an intimate encounter between the body and various objects found in its surroundings, perhaps ones that are supporting it. In doing so, Zach’s work also traces the manner in which memories are constructed and consolidated, coming to appear closer or more distant, and changing uncontrollably.
The installation includes a series of unique assemblages that combine crutches, leather whips, and amorphous sacks filled with an unidentified fluid in various colors. Each of these assemblages constitutes a hybrid combination of worlds, sensations, and emotions, while the space as a whole seems to vacillate between extreme sterility and a permeable physicality.
This almost impossible combination of elements drawn from different worlds, which represent extreme bodily states, is based on the use of readymade objects and industrial materials that undergo a process of disassembly and reassembly, in a manner relating them to new contexts without eliminating or camouflaging the original ones. Metal accessories for disabled individuals, such as crutches or walkers, designed to support the body and complement its impaired functioning, are thus fused with various types of leather whips, which are associated with testing and straining the body’s ability to withstand states of endurance and sexual pleasure. The resulting hybrids preclude the practical use of the accessories in either of these contexts.
The works are minimalist in character, and resemble linear drawings in space, whose grouping together endows them with a certain impression of volume. A volume that is a result of what could appear as the bifurcation, replication, and multiplication of the objects in space, while they undergo a sort of spontaneous mutation. Yet this impression of volume, which creates a sense of presence, in fact attests to what is absent.
The human body, which constitutes the quintessential point of reference for the various elements combined in the works, is completely absent from the space itself. The concern with the intimate contact made by the body as it leans, grasps, absorbs, or experiences pleasure evaporates, and all that seems to remain is a strange hairy growth sprouting out of one of the objects, and fluids in shades of black blue and purple that are contained within soft sacks, providing the only hint of color in the entire space; bodily residues that exist in a liquid state, imprisoned and impeded from realizing their natural thrust to expand in space through the force of entropy. In the absence of an actual body, it seems that the objects themselves acquire a bodily validation, a humanized presence, and the hair growing out of them seems to carry the memory of the body that once grasped them, attesting to the assimilation of the body’s genetic charge into the object.
And so, the very presence of Zach’s works points to an absence – a fundamental lack that cannot be filled mentally or emotionally. These minimalist, seemingly sterile works carry a disturbing charge pertaining to disruption, disorder, excess and contamination. Located in the back of the exhibition space is a large industrial basin filled with an excess of additional sacks containing fluids, which seem about to overflow. This work questions the functionality of the objects scattered throughout the space, the narrative potential embedded in them, and the functional metaphor that arises from them. The sacks in the basin call to mind medical or industrial waste, of the kind accumulated in operating rooms or in biological or chemical labs, while underscoring the dimension of excess that is evoked by their very presence, as well as by the allusion to their contents.
The concept of boundaries, or limits, is clearly attended to in these works; the boundaries of the body, the limits of the support, care or hurt it experiences, as well as the metallic, fluid and conceptual edge or limit of the object itself. The arrangement of some of the works on the floor maximizes their area of contact, and thus also the degree to which they succumb, or are given over to, the surrounding space and to the gaze, in a process of assimilation that seems to challenge the basic separation between space and object.
The work seems to suspend the viewer at a liminal threshold, as the space between the objects and visitors gives rise to an imagined performatives sphere, whose passive quality is due to the prohibition of contact and action. If there is a drama, it unfolds between the body of the viewer and the collapsed, bodiless objects, which allude to the body’s substitutes and extensions, as well as to its possibilities for action. The presence of the body and of various bodily excretions, which accumulate in a concrete and exposed manner, has been made evident over time in works such as Helen Chadwick’s Piss Flowers (1991–92, a series of white bronze sculptures cast out of cavities formed in the snow by the artist’s urine), or Gideon Gechtman’s Shaved Nude or Brushes (1974–79, works featuring the artist’s shaved hair in jars). By contrast, Zach’s works do not underscore the presence of the body but rather its absence. Yet in opposition to this vulnerable, missing, absent body, there emerges the presence of the viewer’s body in space – clumsy, undefined, and seemingly threatened.