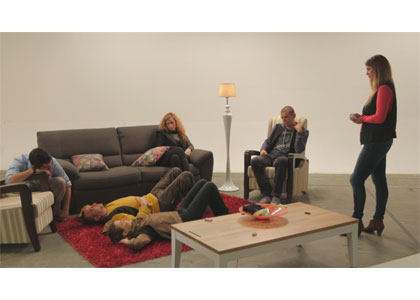 Reserve places for December and January performances at mayak@ptikva.org.il

Einat Amir’s solo exhibition comprises two states: a video installation and a performance. The performance invites 20 viewers to take part in a collaborative event, whose participants are divided into four groups, each experiencing a session of group dynamics conducted by a facilitator. It is not possible to enter the performance without taking part in it.

When no performance is taking place, the exhibition space hosts four video screenings. The screenings show one filmed performance, in which the participants have chosen black vests inscribed with words such as “career”, “disappointment”, “mother”, “sex”. The participants operate in a space divided into four domestic sections – study, bedroom, dining room and living room. These spaces are also reconstructed in the museum, with the viewers invited to visit them and watch the video installation.

In recent years Amir’s work has revolved around the production of laboratory conditions for the study of behavior and culture. This time she does it in a space that resembles the set of a television sitcom, with theatrical dynamics, but accompanied by a team of professional facilitators, and without the presence of cameras, spectators or any other factor that restricts the modes of participation. This event extends over an axis that ranges between performance, acting and authentic participation, and reveals the way we incessantly present ourselves, and the possibility that there is no necessary contradiction between performance and authenticity.

To watch the trailer