Sleep, a film by Andy Warhol 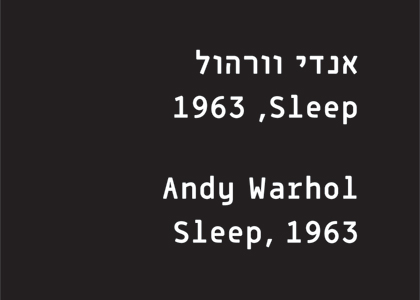 Special project alongside the exhibition
In 1963, shortly after buying his first 16mm movie camera to experiment in cinematic work, Andy Warhol documented his lover at the time, poet John Giorno, sleeping through the night. Sleep, Warhol’s first movie embodies his aspiration to perpetuate unstaged life conditions. Warhol wanted the film to be equal in length to an average night’s sleep of eight hours, but due to technical difficulties he eventually shot less footage, and stretched the film by means of slowdown and editing to six hours. Despite the “shortening,” the film’s first screenings elicited furious responses. The audience, accustomed to narrative films, demanded a refund when they realized that they were viewing a continuous static sequence showing a sleeping man. Steeped in intimacy, the film exposes the moment before or after lovemaking, portraying the naked partner vulnerable and defenseless. The project was given diverse interpretations, but Warhol himself provided a convincing explanation:
I could never finally figure out if more things happened in the sixties because there was more awake time for them to happen in (since so many people were on amphetamine), or if people started taking amphetamine because there were so many things to do that they needed to have more awake time to do them in. … Seeing everybody so up all the time made me think that sleep was becoming pretty obsolete, so I decided I’d better quickly do a movie of a person sleeping.
John Giorno, on his part, recounted that he and Warhol came back from a party, after which he fell asleep right away. He woke up in the middle of the night to find Warhol sitting beside him, watching him sleep. Warhol took a lot of speed in those days, his sleep was troubled, and he often spent his nights staring at his bed partner.
Cinema was Warhol’s true passion. During 1963-64 he created quite a few basic, short “silent” movies which explored the potential of the medium in depicting a portrait, sexual desires, and routine everyday activities. The first of these, Sleep is a slow film portrait, much like painting or still photography. Warhol’s repetition of similar footage in his editing was apparently influenced by Erik Satie’s Vexations—an eighteen-hour-and-forty-minute-long concert performance during which the same brief piano score was repeatedly played 840 times. Warhol never meant his films to be seen “as film,” but rather to expand the boundaries of the medium and push its limits. His films are clearly those of a visual artist who creates something between painting and a moving picture.
The news about Warhol’s sleep movie attracted massive publicity even before the film was edited and screened, and his conceptual daring continued to provoke reactions even among those who never saw it. Once the initial objection dissipated, however, it turned out that the slow motion and the avoidance of effects gave rise to a deeply meaningful work. The film requires active participation one the viewer’s part, much like an abstract painting or John Cage’s music. Even if in our contemporary world, accustomed to voyeuristic websites, it no longer appears all that radical—the stretching of the ethical borders between the private and the public by a myriad of new technologies instilled it with a previously denied legitimacy.