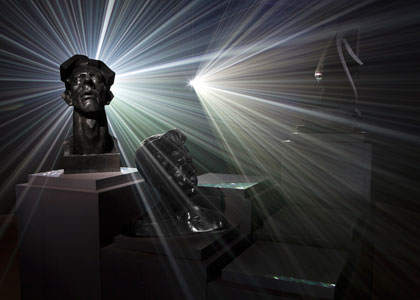 “Continuum” is a new series of exhibitions that strives to shed
light on the Museum’s art collection. Each exhibition will
serve as a platform for invited artists to create site-specific
installations which will explore a single theme deriving from
the collection. A creative endeavor oscillating between a
tribute and an intertextual gesture, this modus operandi is a
paraphrase of Nicolas Bourriaud’s concept of “postproduction”
denoting various processes applied to existing cultural
products, among them art works, to generate links and charge
them with new meanings.
“Heroica,” the series’ inaugural exhibition, turns a mediating,
critical spotlight at the notion of heroism, the value of victory,
and the memory of the fighters. It juxtaposes installations
by two young artists, Avital Cnaani and Alona Rodeh, third
generation descendants of agricultural Zionist pioneers, who
confront the local archetype of heroism by deconstruction and
reconstructing it anew. Cnaani corresponds with Mordechai
Gumpel’s mosaic walls which perpetuate the settlement’s
fighter-heroes; Rodeh corresponds with bronze sculptures
of pioneer figures by Ze’ev Ben Zvi and Yehoshua Yoshpan,
and with a Yizkor sculpture by Zvi Aldoubi.* The visual and
ideological representation of the Zionist ethos of masculinity—
the fighting, land-redeeming sabra—which drew its inspiration
from mobilized modernist art, elicits a disillusioned cynical gaze
in both artists, alongside fascination with the power-minded
image. Via a strategy of depersonalization, each isolates the
heroic image and renders it a formalist motif, whose emptying
opens the possibility for a new narrative.
Cnaani’s ceiling work simulates a silhouette of a landscape
painting, conveying a sense of threat and aggression. The
installation is suspended indoors, at the Yad Labanim House,
as a metaphor for thatch. It vacillates between interior and
exterior, between variable and permanent, between lingering
and moving on. The narrative’s underlying dichotomy is also
discernible in the sculptural matter: motion versus stasis,
flatness versus volume, mass versus weightlessness. The King
of Birds, a heroic archetype in its own right, extracted from the
biblical narrative of bereavement, is depicted in motion, yet
serves as an image of the memory of flight. It contemplates
the gap between the bird of prey and its manifestations
(from Roman culture through the Third Reich to Danziger’s
Nimrod), and its airy, brittle representation. The manual
sculptural work with small wooden sticks and scraps, virtually
handiwork, is congruent with the mosaic technique and with
the minimalistic principles for the creation of anti-sculpture,
associated with abstract drawing modes.**
Rodeh’s audio-visual silhouettes blur the materiality of
the massive modernist sculptures mounted on a Russian
Constructivist type of semi-architectural structure, as a
variation on a victor’s podium. The installation constitutes a
dark site conveying a Pagan ritualistic air, where the sacred
metaphysical aura, despite its artificial graininess and the
exposure of the illusion which sets it in motion, never ceases
to engage in aggrandizement. With theatrical effects drawn
from the clubbing culture, the artist pits the eternal and
sublime with values of camp and trash, thus reflecting the
transformation from the mythological hero’s sculpture to a
requisite in a primitive silhouette spectacle. The glorification
and dramatization generate an experience of ritualistic
empowerment centered on the hero—not the static sculpted
one, but the viewer who is blinded, observing the work as if
he were sightless. The song’s lyrics expose an affinity between
the intense flight of the bird of prey from the adjacent space
and the yearning for desistence, reinforcing the link between
heroism and death, rendered ever more conspicuous vis-à-vis
the resounding silence of the commemoration compound.***
The choice of two such visually divergent works which
offer a diametrically opposed viewing experience—works
which were, in fact, motivated by a similar act of image
deconstruction and its uprooting from the mythological
context in favor of a current, personal narrative—indicates
the project’s intention to introduce a wide spectrum of
interpretations for refined, quintessential mindsets and motifs
in the subconscious of local culture. 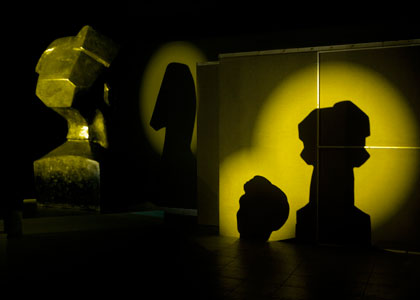 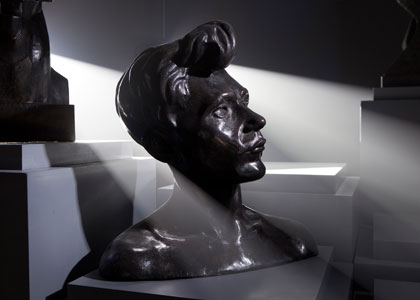 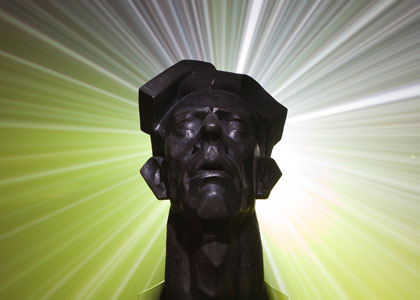 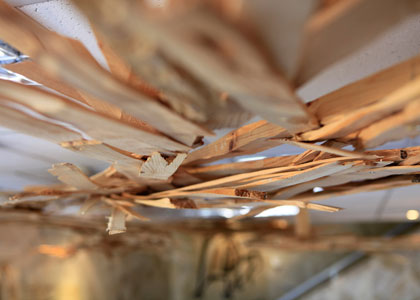 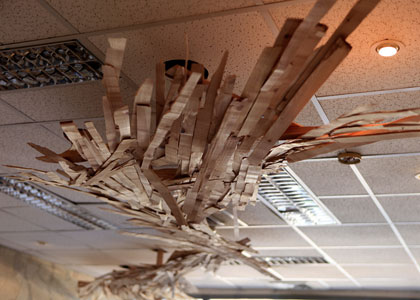 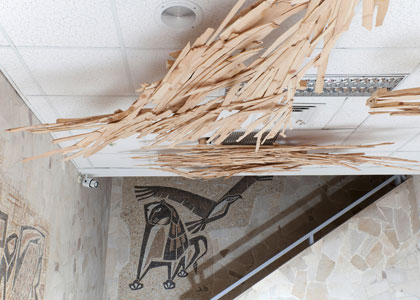 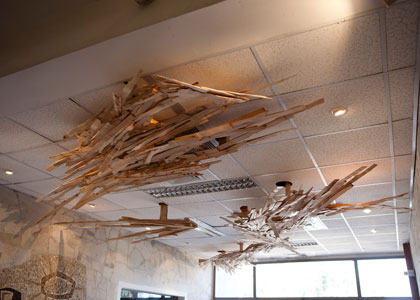