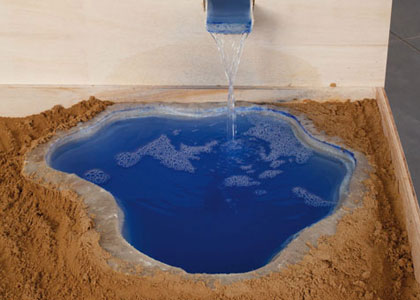 Alona Harpaz and Mika Rottenberg’s installation-model acquired its title from the name of a non-profit  rganization (Infinite Earth) established by the two artists in Berlin in 2008, intended to aid needy  mmunities by supporting education, setting up employment centers, and training women and children in andicrafts. The artists raise funds by selling photographs in limited editions—”by-products” of small model-works inspired by Third World landscapes which they create. The revenues from these “by- roducts” are directed to India and Africa—e.g. to supporting a weaving center in the village of Chamba in Northern India, owned and managed by a local women’s organization, or to an educational program for homeless sick children in Namibia. During the run of the exhibition, the artists will conduct a workshop in community empowerment at a center for girls in Petach Tikva.
Unlike the previous projects (Infinite 1 and Infinite 2), implemented on a small scale, the installation  nfinite Earth functions as a “visitors’ center” for the viewers’ enjoyment. A fantasy about art and play, it  esembles a titanic board game or a touristy miniature park consisting of the four elements—air, fire, earth, and water. The game pattern projects, for instance, on the rehabilitation of the weaving factory,  ntroducing the potential for repeating a work of art, which is then sold, activating the cycle of existence  nd livelihood as in a food chain; the energy reservoirs are drawn from the earth and return to it, just like all the other artistic-economic “give-and-take” resources in the project-game created by Harpaz and  ottenberg. The installation will be offered for sale during the exhibition to promote additional such ojects.
The quasi-natural (bodies of water, a mine) or “child-like” (sandbox) objects in the installation spawn a  icrocosm, a mental landscape which does not represent a real place, yet draws inspiration from the  eographical and cultural scenery of East Asia. The artistic vision is imbued with values of giving and  eceiving, activating a web of movement and change which, in turn, leads to a renewed distribution of resources aware of the need to save energy and preserve the environment. As a whole comprised of  ountless representations and fragments of reality, the installation is typified by flux and cyclicality of  hings which penetrate one another, sustain one another, depend on one another, setting one another in
motion. This reciprocity is linked to one of the insights at the core of the Buddhist world view—a world  hose entire elements, reflections, and phenomena forever exist in a mutual interdependence, and where  verything is in a constant state of otion, flux, and change. This “cyclicality” seeks a human  ractice  nderlain by oundless responsibility for others and for one’s surroundings; one whose echoes re discernible in the installation, which sweeps the viewer into a prevailing game f truth.