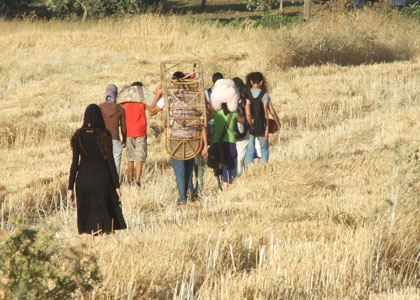 “Conversion,” an experimental cinema project of the New Israeli Foundation for Cinema & TV, centered on a call to artists to create works addressing transformation, metamorphosis, and reversal. Its point of departure was the question whether internal conversion—private, cultural, or political—is at all possible. The term “conversion” is derived from the theological discourse. Conversion embedding the potential for personal and/or collective redemption has taken many forms over the years, and continues to play a central role in language and culture. In contemporary popular culture it is manifested in the reality TV genre and in the advertising world. In addition, the project sets out to explore conversion as a metaphor, examining its feasibility and relevance to the Israeli reality.
The works in the exhibition differ from one another in many aspects. Nevertheless, in all of them conversion and change emerge primarily as a performative act as part of which the transformation is signified by repetition of acts. Another interesting aspect is the distortions occurring in the work with regard to the perception of time. They refuse to settle in the category of diachronic temporal perception, thereby introducing change and conversion as constantly oscillating between past and an eternal present, between the personal and then social, between fantasy and the everyday. The curatorial text accompanying the show is a filmed text comprising short interviews conducted by the curator, Maayan Amir, with psychologists and other therapists from various schools concerning the question whether a man can change. Instead of trying to signify the works, this choice strives to form an anecdote, accentuating the problematicity and complexity involved in the attempt to trace transformation.