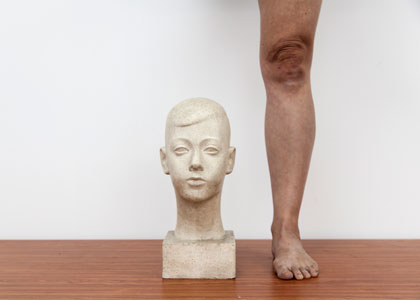 “I think sculpture happens in that space, between the object and the person who is looking at it. It’s obvious but it’s still mysterious how much you can do with that space.”[1]
Artist Michal Samama’s project “Profile” joins a series of exhibitions in the Petach Tikva Museum of Art’s Collection Gallery. These exhibitions center on the study and reflexive observation of the museum itself, by means of its art collection. Samama’s project revolves around ten head sculptures from the collection, which she integrates into a physical study involving a live performance in the gallery space. The research in preparation for this project, which was especially created for the Petach Tikva Museum of Art, began with the titles of the works in the collection. Before Samama saw the works themselves, she received a chronological inventory of them. Based on her examination of this list, she began creating an archive of all the figures represented in the collection, and imagining possible encounters among them – as in an imaginary play with no specifications of time or place.
The reading of the titles, which has become a central component of the work, dialogues with the process of inventorying the collection, which takes place every eight years in accordance with the Ministry of Culture’s regulations. In many cases, as the reading of these titles aloud reveals, they provide little more than general and rather obscure descriptions, which conceal more than they reveal. Whereas the stories of the figures refuse to present themselves through this action, the arbitrary and impossible relations that the list makes possible – between titles such as Woman and Boy and between well-known figures such as Rasputin and Ben-Gurion, who are situated one alongside the other as equals – give rise to strange and thought-provoking encounters, which situate the museum bureaucracy as both an object of study and a source of inspiration.
.
At the same time, many of the titles reveal that the works entered the museum collection due to its affinity, during the first decades following its establishment, with the commemorative activities undertaken in the adjacent memorial site (Yad Labanim), where the Collection Gallery is located. It is no coincidence, then, that the “inventory” conducted by Samama may call to mind the practice of reciting the names of local fallen soldiers, which is part of the memorial ceremonies held annually at the site.
The affinities and parallels between the art collection and its initial formation under the auspices of Yad Labanim recur throughout the work, which moves between different poles – artistic and military, ceremonial and performative, sculptural and regimented, intimate and collective. This multiplicity of meanings is also embodied in the title of the project, Profile, which ties together the study of the other’s face and body and an evaluation of his or her “military profile” – a quantitative evaluation assigned to each soldier by the IDF.
By means of movement, the juxtaposition of the static head sculptures and the moving bodies of the performers, Samama produces reciprocal relations that at times frame the living body as an object, while presenting the sculptures as attempting to awaken to life. The artist seems to be reconstructing and completing the identity of the sculptures, providing them with a body and thus recreating them as entities that exist among us in the here and now. In this process, familiar Israeli symbols, texts and representations are deconstructed into the underlying elements of material, movement, form, and sound. These elements are discovered and re-explored through the encounter with the other – leading from the name to the face, to the individual body and to a multiplicity of bodies.
.
1. Gabriel Orozco in conversation with Benjamin Buchloh, in Clinton is Innocent, exh. cat. Musée d’art modern de la Ville de Paris (1998), p.43, cited in Kate Love, “The Experience of as a Living Through of Language,” in After Criticism: New Responses to Art and Performance (ed. Gavin Butt), p. 157.

About the Artist
Michal Samama creates performances, installations, and choreographies in various formats for a range of different spaces. Her works, most of which are site specific, move between the stage, the gallery, and the public sphere. Samama received an MFA with honors from the School of the Art Institute of Chicago. In recent years, she lived and worked in New York and Chicago, and her works were exhibited at the Judson Church, New York Live Arts and the Chocolate Factory Theater in New York City, as well as in the galleries Aspect Ratio, Defibrillator, and Sector 2337 in Chicago. She has participated in several artist residency programs in Israel and abroad: Movement Research in New York (2011–2013), the international residency program of the Musrara School in Jerusalem, the Fest’Factory, Bat Yam, and in the Yasmin Godar Studio (2017–2018).

With the support of a special grant from the Yehoshua Rabinovich Foundation for the Arts, Tel Aviv