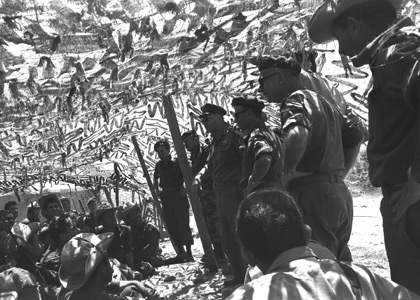 June 2007 marks 40 years since the Six Day War, the most important of Israel’s wars, whose repercussions are apparent to this day. The exhibition and accompanying book examine the place of the war and the military in Israel’s civil and cultural arena, the domination of militarism over Israeli existence and its influence in forming public opinion and the worldview of the Israeli public.
On one hand, they reflect the euphoria and intoxication of power, which swept up a large part of the Israeli public, who on many occasions lacked critical judgment, and myths created following the war.On the other hand, they represent the alternative voices heard in Israeli society over the years against the war and against the myths it designed.