There is Nothing There, Katerˇina Šedá 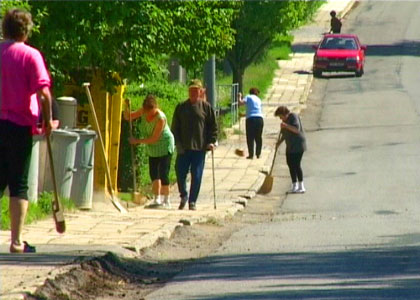 Czech artist Katerˇina Šedá regards her work as “social art.” She is not interested in the gallery or  useum space, but in the work with people in an attempt to bring them together into a community. In her  rojects, in which she explores and highlights social patterns under lab conditions, she activates the  articipants in a type of game, which contributes to confrontation of the loss of identity and sense of  lienation in an ever-changing contemporary society. The Czech word šedá means gray, a color which  as become a hallmark of her work. Šedá gathers “gray” people, who do not stand out in their own right, and  ctivates them, thereby striving to change their lives and shed a new light on gray.
Šedá’s largest project, whose documentation is presented in the exhibition, is a social game she  reated for the inhabitants of three sequestered Czech villages, which culminated in a Saturday activity in the village of Ponetovice (in May 2003). For an entire year, the artist observed and analyzed daily life in  hese villages, only to learn that their occupants often complain “there is nothing there”: no basic services
such as post office, health care, or a site for social gatherings. A questionnaire she distributed asking  bout living habits in these villages revealed that the inhabitants spend most of their weekends keeping up a monotonous routine.
In light of her findings, Šedá set out to enhance community life via an activity which unifies forces to  reate a whole greater than the sum of its parts. Everyday life is granted a unique power when every  imple act is undertaken by all village people simultaneously. The residents were recruited to perform a  daily regime of activities” following a long process which entailed house calls, advertisements, and public meetings. The program-game was based on a strict timetable, from getting the morning paper,  hrough shopping, airing and cleaning the house, bike riding along the village paths, and a fixed lunch, to   meeting in the local pub,
watching the news, and turning off the lights—all at prescribed times. The social research resulted in an  xciting experience, enabling each resident to take part in a collective experience and realize the power  nherent to the little things in life. Nothing compares to the illumination afforded by the discovery of the  reviously invisible.
The interview was prepared for the group exhibition of the 21 shortlisted artists of the 2010 Future  eneration Art Prize, PinchukArtCentre, Kiev, Ukrai